For anyone familiar with EY's impressive social media efforts (including embarrassing interns by posting photos of them posing with gorillas and pimps at IILC on Facebook), the name Dan Black goes hand-in-hand with engagement. The guy's pretty good at what he does which is probably how he's managed to escape criticism on this website for as long as he's been a-tweeting away and we've been viciously attacking the establishment from the bottom up. That winning streak, sadly, ends today.

First, if you're wondering why @EYDan isn't showing up in your timeline these days, it's because he changed his Twitter handle to the more descriptive but oddly spammy @DanBlackEY1. Presumably, @DanBlackEY was taken by an egg-head Twitter squatter who probably forgot they even opened an account.

Annnyway, Twitter is great for short conversations as we all know but sometimes, the 140 character limit means certain parts of conversations taken completely out of context look really, really wrong. That's exactly what happened here: 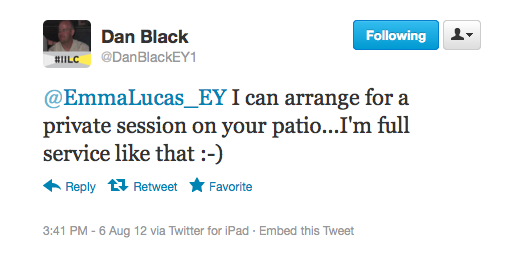 In Dan's defense (we know he's a good family guy), he was responding to Emma's tweet about eating breakfast without watching Dan dancing on stage at IILC but still, if you didn't know any better and had a sick mind…

For years, audit has struggled to attract talent and especially leadership because let’s be honest, audit is awful. You’re clients least favorite person, you have regulators breathing down your neck, and one little mistake can ruin your whole career. Plus the pay is…not great compared to other service lines. EY UK Chair and Managing Partner […]