As you've all heard by now, Grant Thornton will be launching an unlimited PTO policy starting November 1. The firm documented its employees' surprise to the move and it is surprising since less than 1% of companies offer unlimited vacation. Not only that, but the Purple Rose of Chicago will be the only major accounting firm to offer this perk. That will provide them with a nice talking point when they're courting accounting students and experienced professionals who may be considering GT's larger, more prestigious competitors.

In situations like these, current employees have lots of questions. Grant Thornton has tried to address these in an internal FAQ that found its way into our inbox. It covers a lot of the basics — who's eligible, how it will be recorded and tracked, people with accrued PTO will get a payout, etc. — but the two most interesting topics covered are 1) the conflicts that will inevitably arise and 2) the firm's rebuttal to the contention that people will feel pressure to take less PTO.

Here's the portion that addresses conflicts:

And here's the response to the idea that employees will take less vacation: 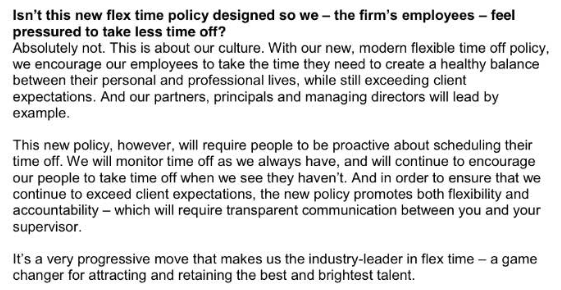 The conflicts issue is more or less a non-issue. Just because an accounting firm provides its employees with unlimited PTO doesn't mean a week of your vacation can't be abruptly cancelled or rejected by a superior because of client demands. Anyone hoping for a GT PTO policy where the inmates run the asylum were bound to be disappointed.

On the other thand, the firm's response to the "pressure" question is kinda funny. I say that because it's posed in the wrong context. No one suspects the firm of a devious plot to provide a generous perk in order to get employees to work more. It's just that this new perk isn't all that more generous than whatever the PTO policy was before. Few people take vacation already, so giving them unlimited vacation is pointless if you're trying to convince them to take time away from work.

Some people say that's due to the US's work-obsessed culture, Megan McArdle contends that it's due to "superjobs" that are so great that people who have them don't want to take time off. Most likely, reality is somewhere in between, but the best way to ensure that people take time off is to either make it mandatory or incentivize it. One source wrote us:

I'm somewhat disappointed as the optimist in me was holding out that maybe they would implement what Caleb had mentioned, a minimum amount of days employees are required to take or a small nominal incentive.

As GT's response said, the new policy "will require people to be proactive about scheduling their time off." That is precisely the problem: people aren't proactive! And until you give them an incentive or mandate to get out of the office to relax and recharge that's unlikely to change.

Plenty of new promotion purple roses were handed out at Grant Thornton on Aug. 1, as the firm celebrated its largest class of new partners, principals, and managing directors in GT’s history. The 96 new PPMDs in the class of 2022 surpasses the 87 in last year’s class, which had been Grant Thornton’s largest ever. […]

Ed. note: Internal email regarding the acquisition sent to Grant Thornton staff included below. This is a developing story. A tipster reached out to us this morning to let us know the rumor mill is churning over Guidehouse potentially picking up GTPS. “This took some people by surprise when they read about it on Fishbowl,” […]