I got a notification from Twitter the other day reminding me that it’s been 10 whole years since I joined. Wow, that long? I realized that I’d done it the week the economy started swirling down the drain in earnest back in 2008. Unlike my Twitter anniversary, we can argue all day over the actual anniversary date of the great collapse of 2008, but generally agreed upon among scholars, economists, and angry tattooed bloggers around the world is that the party really kicked off Monday, September 15, with the collapse of Lehman Brothers.

Now, Going Concern wouldn’t be born until a little less than a year later so we weren’t reporting live from the scene (well, technically I was but this isn’t my personal portfolio), but there was still a significant cleanup effort underway by the time we showed up. Although no one got hit worse by the catastrophic global failure of the economy than everyday folks just trying to make an honest living, this site was never about them, so naturally, we focused on what part accountants played in bringing the economy to its knees.

For nostalgia’s sake, let’s take a look back.

The Collapse of Lehman

We couldn’t have any reasonable discussion about the financial crisis without giving an excessive amount of lip service to the collapse of Lehman. More specifically, EY’s responsibility (or lack thereof) as Lehman’s auditor to, in the immortal words of late-night TV diva Susan Powter, “stop the insanity.” 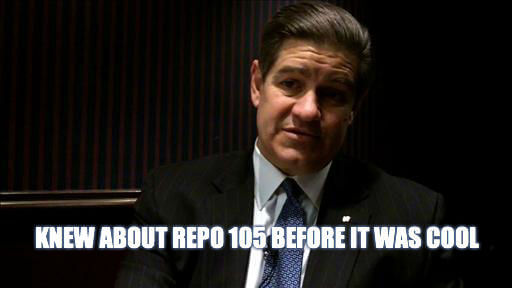 As we all know, EY looked the other way approved of Lehman’s treatment of Repo 105 transactions in accordance with FAS 140. So much so that when U.S. Bankruptcy Examiner Anton Valukas released his damning 2,200-page report on Lehman’s failure, EY stuck to its guns. “Our last audit of the company was for the fiscal year ending Nov. 30, 2007. Our opinion indicated that Lehman’s financial statements for that year were fairly presented in accordance with Generally Accepted Accounting Principles (GAAP), and we remain of that view,” the firm said in a statement following release of the report.

In 2015, EY settled with the New York attorney general in what it called its “last significant lawsuit” over Lehman for $10 million.

As recently as July of this year, PwC is still battling the ghost of Colonial Bank. The long and short of it is that PwC was (is?) accused of failing to notice “a brazen and costly fraud” between Colonial Bank and the now-defunct mortgage lender Taylor, Bean & Whitaker. A federal judge ordered PwC to pay the Federal Deposit Insurance Corp. $625 million in damages on July 2, making it one of the largest-ever awards for accounting malpractice. PwC has vowed to appeal, naturally, so maybe we’ll see you right back here in another 10 years for the 20th anniversary of the financial crisis with some news.

Deloitte was also sued by the trust overseeing the bankruptcy of Taylor, Bean & Whitaker Mortgage Corp. to the tune of $6 billion, give or take, and settled in 2013 “to the mutual satisfaction of both parties.”

Look, we all know Big 4 accounting firms weren’t the ones handing out mortgages like candy to minimum-wage slaves in historically depressed housing markets. No one is saying that.

Still, Deloitte made a smart move in 2009 and settled a subprime lawsuit with American Home Mortgage Corp. for $4.75 million, presumably because it was easier to throw money at the problem than to have subprime attached to its name and henceforth be known forever as the firm that let the economy go sour. We’ll let EY keep that title.

Following the total failure of the global economy, it made sense that average Joes might have some questions such as “Hey, is anyone minding this store?” and “Wait, what do auditors do exactly anyway?” Subjects once relegated to the oversmart minds of economists, career academics, and maybe one guy at FASB who gives a crap were now put on display for all to see. Joe Schmoe of Omaha doesn’t care about Financial Reporting Standard 140; all he knows is that the Lehman collapse set off a chain reaction that led to him losing his modest Midwestern home, wife, dog, pride, and possibly a tooth or two. So now Joe, a lifelong Journey fan, finds himself drawn to country music and wondering what role these elusive financial professionals played in what his life has become.

So, it was only natural that people started asking “why have auditors at all?” As we all know, the financial crisis was but a climax of a large number of issues that, if we’re honest, still exist today just in different forms.

“What precise purpose does it serve to have a supposedly independent auditor (paid for by the company) sign off on accounts? From Enron to Lehman to Satyam to Parmalat, it’s clear that the major accountants lack either the skill or the determination (or both) to ferret out fraud,” wrote Steve Goldstein at MarketWatch in 2013.

TBH I could sit here all day pulling out stories about audits gone wild, bank failures, and giggle-worthy quotes from former Federal Reserve presidents. But no one wants to read a 5,500-word summary on something that happened a decade ago that we’re all trying to forget, so I won’t.

We’ve had 10 years to learn from our mistakes, yet mere handfuls of months following the economy bottoming out, lenders were moving from subprime mortgages to cars. Accounting firms are still getting sued for performing shoddy audit work. And the SEC is probably too tied up in chasing cryptocurrency scammers to care much about what financial firms are or aren’t doing these days.

The lesson? What lesson. Life goes on.

Did I miss one of your financial crisis Greatest Hits in this roundup? Lemme know, I’ll add it to this nostalgic dumpster fire.