Next up in the parade of 2019-20 Financial Reporting Council audit quality inspection reports is the black and yellow float of EY U.K. In the most recent inspection cycle, EY had a smaller audit sample size than Deloitte, PwC, and KPMG, and that was probably a good thing.

The FRC noted in its EY report:

We had selected 16 audits to review in the current inspection year. For one of these audits (Thomas Cook) the FRC’s Enforcement Division decided to launch an investigation before the inspection was completed. In the other case (a non-UK company) it was not possible, for various jurisdictional and legal reasons, to start the inspection. Accordingly, only 14 audits are included in the numbers, although the findings for the audit that is subject to investigation are included within the key findings in this report.

EY is being investigated for its auditing of the 2017 and 2018 financial statements of travel company Thomas Cook, which collapsed in September 2019. The outcome of that investigation will probably be bad for Uncle Ernie’s auditors but I’ll probably be in my 50s by the time the FRC’s report sees the light of day.

And is the non-U.K. company the FRC references Wirecard, perhaps? Probably not, but who knows. Had Thomas Cook and Wirecard been included in this most recent review of EY’s auditing prowess, there would have been a +2 in the “significant improvements required” column.

But there were only 14 audits inspected instead of 16, so let’s see how EY did:

We reviewed 14 audits this year and assessed ten (71%) as requiring no more than limited improvements. Of the nine FTSE 350 audits we reviewed this year, we assessed seven (78%) as achieving this standard.

So 10 good, four (28.6%) not so good, including one that required significant improvements. That’s slightly worse than EY’s 2018-19 inspection report, when auditors misfired on 22% of audits.

And EY failed to reach the target set by the FRC a few years ago, that at least 90% of FTSE 350 audits should be “good or requiring no more than limited improvements.”

Here are a couple graphs that show why EY was “disappointed” in the results of its latest inspection report: 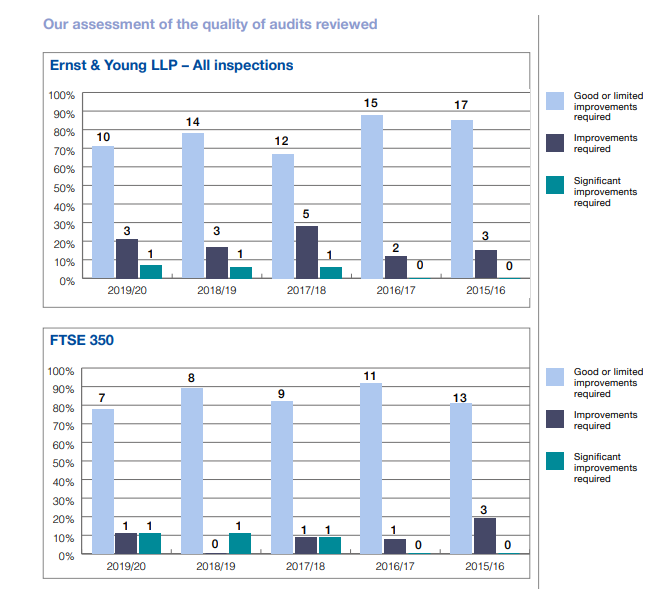 From the looks of it, EY auditors had some problems with quality control:

Saying auditors have difficulties with quality control procedures is like saying Big 4 partners are mostly old white dudes. It really doesn’t need to be said because everyone knows it.

Deloitte Sucked the Least In Latest Batch of U.K. Audit Quality Inspection Reports
PwC U.K.’s Auditing Report Card Gets a Grade of U for Unsatisfactory