A CPA who once was the director of Securities and Exchange Commission reporting for eBay Inc. was charged with insider trading by the SEC on Sept. 28 for allegedly using insider information ahead of a PayPal Holdings acquisition to make nearly $36,000 in illegal trading profits, according to documents released on Oct. 16.

Bryan Long, 42, is accused of trading ahead of Xoom Corp.’s July 2015 acquisition by PayPal, which was owned by eBay at the time. The complaint states that in May and June 2015, Long bought speculative call options on Xoom stock based on material nonpublic information about the planned acquisition that he “misappropriated from his employer” in advance of the deal’s announcement. At the time of Long’s trades, he was eBay’s director of SEC reporting.

Long worked at eBay from October 2013 to July 2015 and then prepared PayPal’s SEC filings from July 2015 to December 2015. Before joining eBay, he worked for 10 years at a “prominent accounting and auditing firm in a variety of roles related to auditing,” the complaint states. According to his LinkedIn profile, that firm was Deloitte & Touche, where he served as an audit senior manager from August 2003 to October 2013.

I assume insider trading agreements are fairly common in publicly traded companies’ offer letters and/or employee contracts. But it’s still kinda funny that Long signed his, knowing what he is accused of doing two years later: 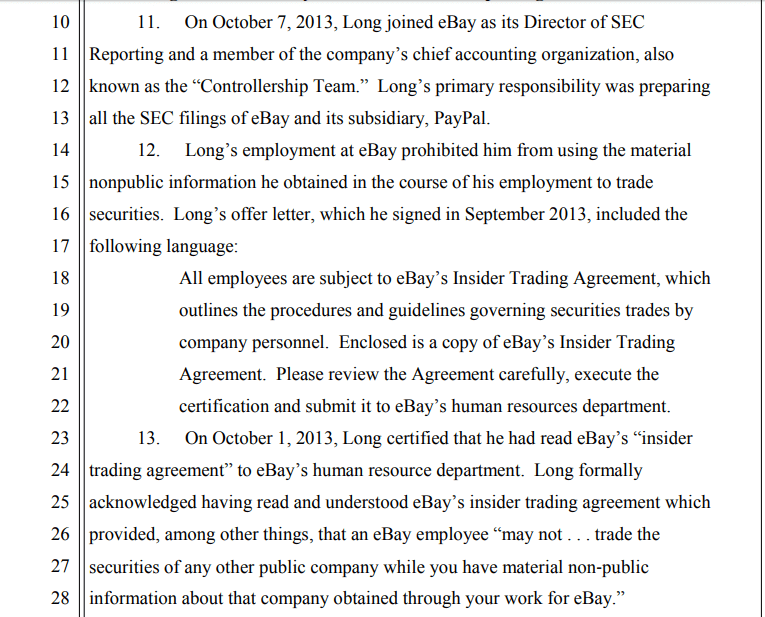 And according to the complaint, Long acknowledged in August 2014 that he read eBay’s “Code of Business Conduct & Ethics,” which stated, in part: 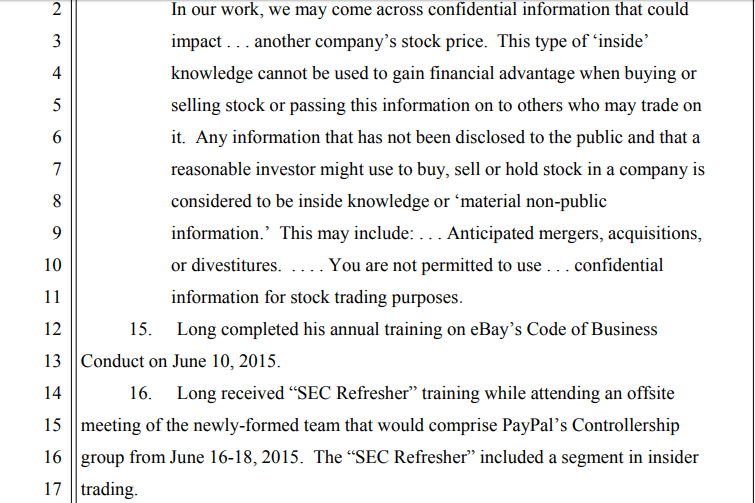 According to the complaint, Long purchased Xoom call options in late May 2015 shortly after PayPal made its initial acquisition offer. Approximately one month later, after learning that the deal was moving forward and could be announced in “early July,” Long allegedly engaged in a second round of illegal trades, purchasing additional Xoom call options that were due to expire in less than a month.

On July 2, 2015, the day after the Xoom/PayPal acquisition was announced, the complaint states that Xoom stock opened at $25.50 per share, which was a 52-week high and an increase of more than 20% from the previous day’s closing price. In addition, the volume of trading in Xoom shares was 30-times higher than the prior day.

At all relevant times, Long acted with scienter. Long knew, or was reckless in not knowing, that he was trading on material nonpublic information that he misappropriated from his employer.

The SEC’s complaint, filed in federal district court in the Northern District of California, charges Long with violations of Section 10(b) of the Securities Exchange Act of 1934 and Rule 10b-5, and seeks a permanent injunction, disgorgement of ill-gotten gains, pre-judgment interest, and civil monetary penalties.

This press release from the SEC is wayyyy too boring to be rewritten in an interesting way on a sunny Friday afternoon so have some copy paste instead: The Securities and Exchange Commission today charged audit firm CohnReznick LLP with improper professional conduct on engagements for two clients in 2017. The two clients, Sequential Brands […]

People who work in the enforcement divisions at the SEC and the PCAOB must have been busy doing other things than monitoring the gatekeepers of the capital markets last year, as accounting and auditing enforcement activity decreased and monetary settlements fell sharply, according to a recently released report from Cornerstone Research. The two regulators made […]