Please ensure Javascript is enabled for purposes of website accessibility
Latest
Friday Footnotes: EY Can’t Hire Tech; John Doe Sues the PCAOB; Auditors Can’t Find Torpedoes and Missiles | 1.20.03 The Largest Accounting Firm in Kentucky Thinks a Tower Will Win the Talent War Fourteen People Who Inspired Future Tax Criminals in 2022 We Had to Scroll Really Far Down to Find a Big 4 Firm on This Glassdoor Best Places to Work List Accountants Will Not Be Motivated to Get Back to the Office

David Cay Johnston has a story with the counterintuitive headline "Social security is not going broke."  How does that work?

With the coming bulge in retirees, Social Security will start to pay out more than it takes in 2021, according to projections in the latest annual report. Under current law the program would be able to pay only about three-quarters of promised benefits starting in 2033. But that scenario can easily be avoided through a combination of four policy changes that would ensure full benefits continue to be paid, though I fear Congress will continue to do nothing.

“Reagan Standard?”  Apparently that means a wage base indexed to some inflation rate much higher than the increase in the cost of living, which was the standard set in the Reagan-era legislation.  Maybe that’s the Reagan Standard that Reagan really meant (it’s hard to read minds, especially of dead people), but it certainly wasn’t part of the reforms he enacted in 1983.

Two would be raising the Social Security tax rate by two percentage points.

It’s not clear if he means restoring the 2 percentage-point cut enacted as an ineffective “temporary” stimulus measure, but assuming he means increasing the default 12.6% rate to 14.6%, that would be a 15.8% increase in the rate.  Given that Congress was too afraid to let the 2% temporary rate cut expire last year, they aren’t likely to be brave enough to add another 2% on top of that.   But that seems like a slam-dunk compared to the next two prescriptions:

That tax hike could be smaller or even avoided if, three, we reignited the growth in wages. Median wages have fallen in 2010 back to the level of 1999. And, four, it would help just as much if we created millions more jobs, which since 2000 have grown at only a fifth the rate of population increases.

These are policy changes?  That means the current stagnation is a policy choice.  And the 10% unemployment spike was, too.  Apparently there is a policy control room for the economy, like the one they had in Pinochet’s Chile.  It uses high-tech computers and the latest-model Telex machines.  In the big chair there are two knobs, one for median wages and one for job growth — and they work independently of one another.  And, inexplicably, the politicians don’t have them both turned up to 11.  Morons! 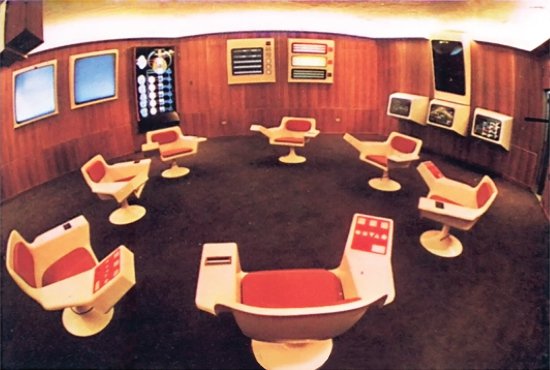 The Chilean economy control room in 1973.
Social Security is really an unfunded defined benefit plan.  The DOL would have imprisoned any private-sector operator of such a badly-funded plan long ago.   Its historic surplus has been squandered, and its income will soon exceed its outflow under any realistic assumptions.  To say that is not “going broke” is like saying Pets.com wasn’t going broke in 2000, assuming everybody bought an extra dog.