Latest
Due to a Lack of 12-Year-Olds to Run This By, EY Israel Totally Missed the Double Entendre In This Brochure KPMG Can’t Get Out of Class-Action Suit Filed By Miller Energy Investors $58,508: The Average Starting Salary for New Accounting Grads KPMG Poaches Someone From PwC and Issues a Press Release, Parts XII and XIII Here’s Your Open Thread For the Fifth CPA Exam Score Release of 2021

Another “KPMG 5” executive who will be serving prison time for his role in a scheme to steal confidential audit inspection lists from the PCAOB was suspended today from appearing or practicing before the Securities and Exchange Commission as an accountant. 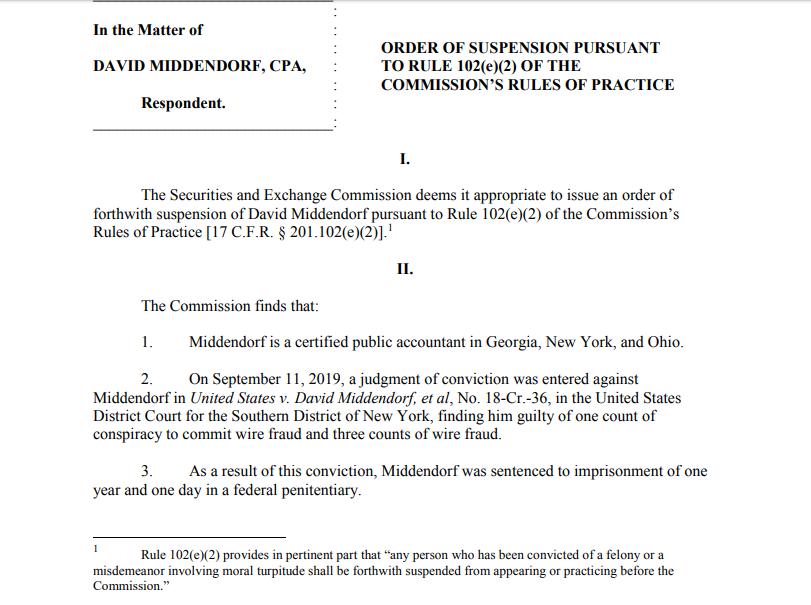 Middendorf is appealing his conviction.

Ex-KPMG executive director Cynthia Holder, who was sentenced to eight months in federal prison in August, was banned from appearing or practicing before the SEC as an accountant last November.

A Tennessee federal judge on May 7 greenlighted class certification in a multiyear lawsuit against KPMG by investors of the now-defunct oil and gas company Miller Energy Resources Inc., despite KPMG’s best efforts to get the lawsuit thrown out. According to Law360, U.S. Magistrate Judge Debra C. Poplin had recommended that the Miller Energy investors […]

In today’s edition of “Big 4-on-Big 4 Poaching From Around the World,” we have two more examples of PwCers hoping the grass is more greener at KPMG. First, we go to Scotland where Rob Aitken left PwC to become KPMG’s newest transaction services director in Aberdeen. The website Insider.co.uk got some information about KPMG of […]

Due to a Lack of 12-Year-Olds to Run This By, EY Israel Totally Missed the Double Entendre In This Brochure