As you recall, last week we went over the Deloitte AERS Advisory group's compensation numbers. Today, we have more comp data to share, this time for the opiners. Unfortunately, we don't have the financial results slide but most of all the other details will be included in this post. Let's get right to it, shall we? 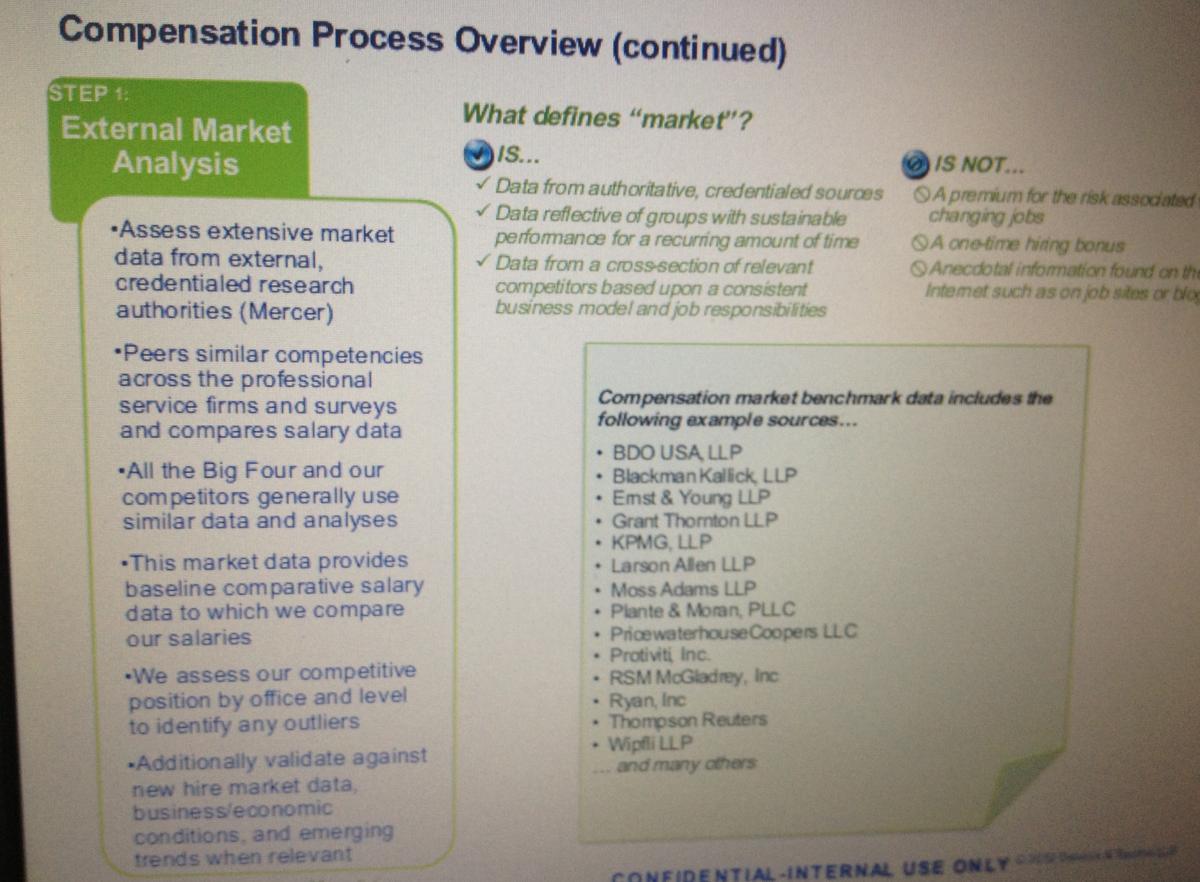 You'll notice immediately that the slides for audit look very similar to those for advisory. We had to edit some of them for size, so forgive the chopped up appearance.

First, this "market analysis" slide outlines a lot of the same sources for determining the "market benchmark" and also states how "market" is and is not defined.

Next is a new slide that outlines "Compensation Guiding Principles": 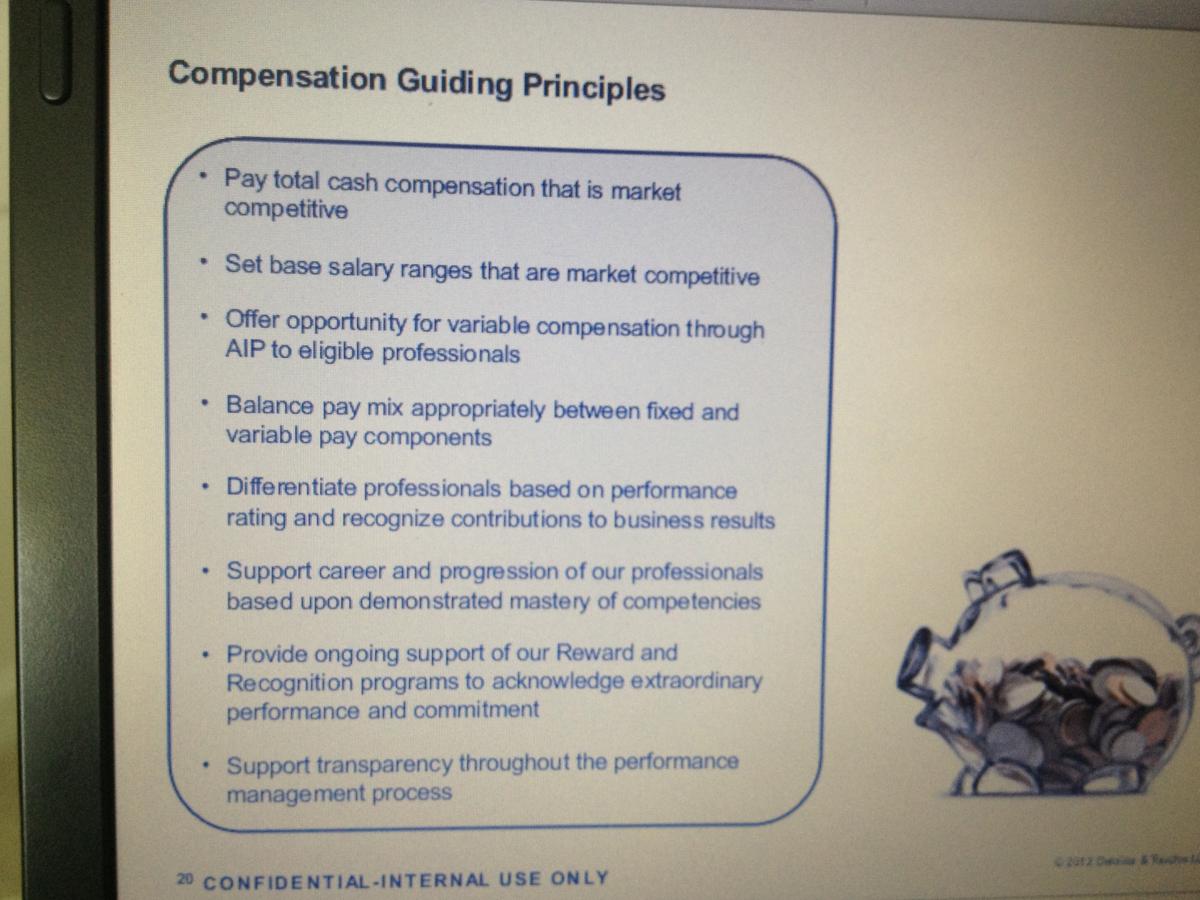 At first glance, there's nothing too special here with the exception of the "support transparency" bullet, which may be a debatable point. 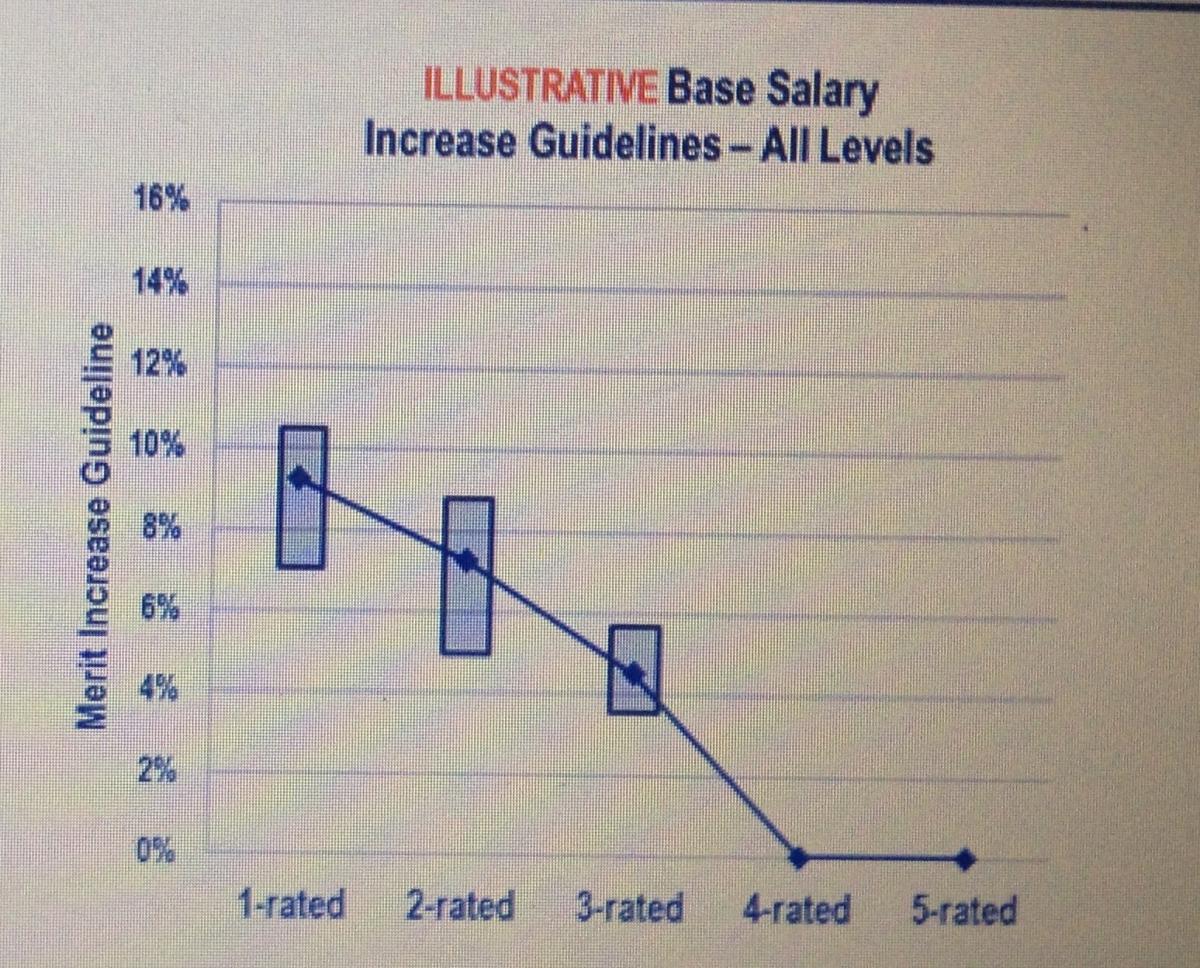 No surprise that the audit folks won't be receiving as generous of increases as their advisory brethren. This shows that the highest-ranking auditors can expect something in range of 7.5% to 10.5%.

Next, we have AIP for Senior Associates: 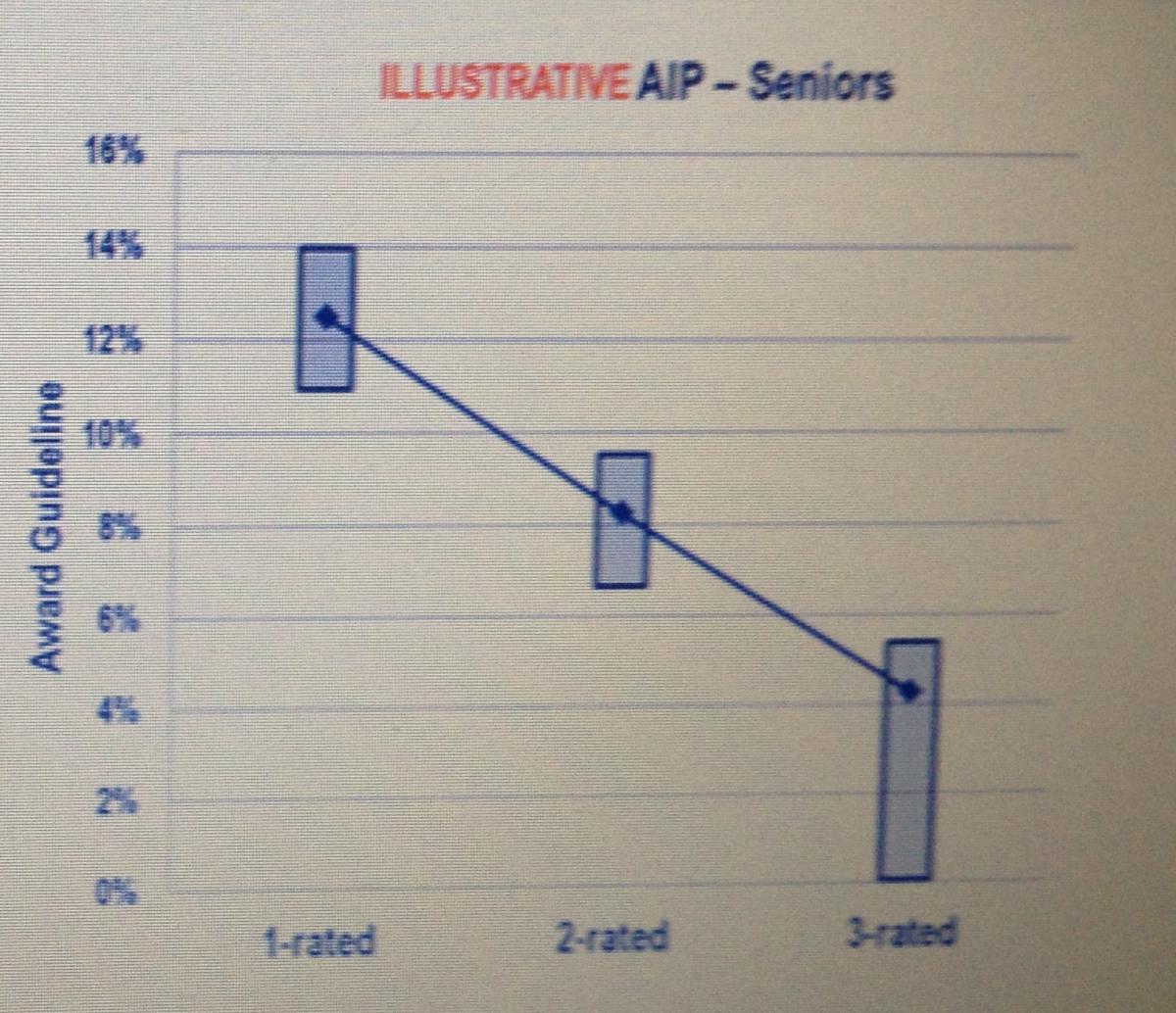 Consistent to the advisory slide, you can see that the 1-rated auditors will do substantially better than the 2 and 3-rated performers when it comes to AIP. However, the percentages of the awards are, again, significantly lower with audit topping out at 14% versus advisory's 18%.

The text that accompanied this slide claims that "95% of eligible professionals [i.e. 3-rated and higher]" received AIP compensation which is "much higher than our competitors." It also states that the AIP pool is higher than last year, although no figures were provided to support that claim. 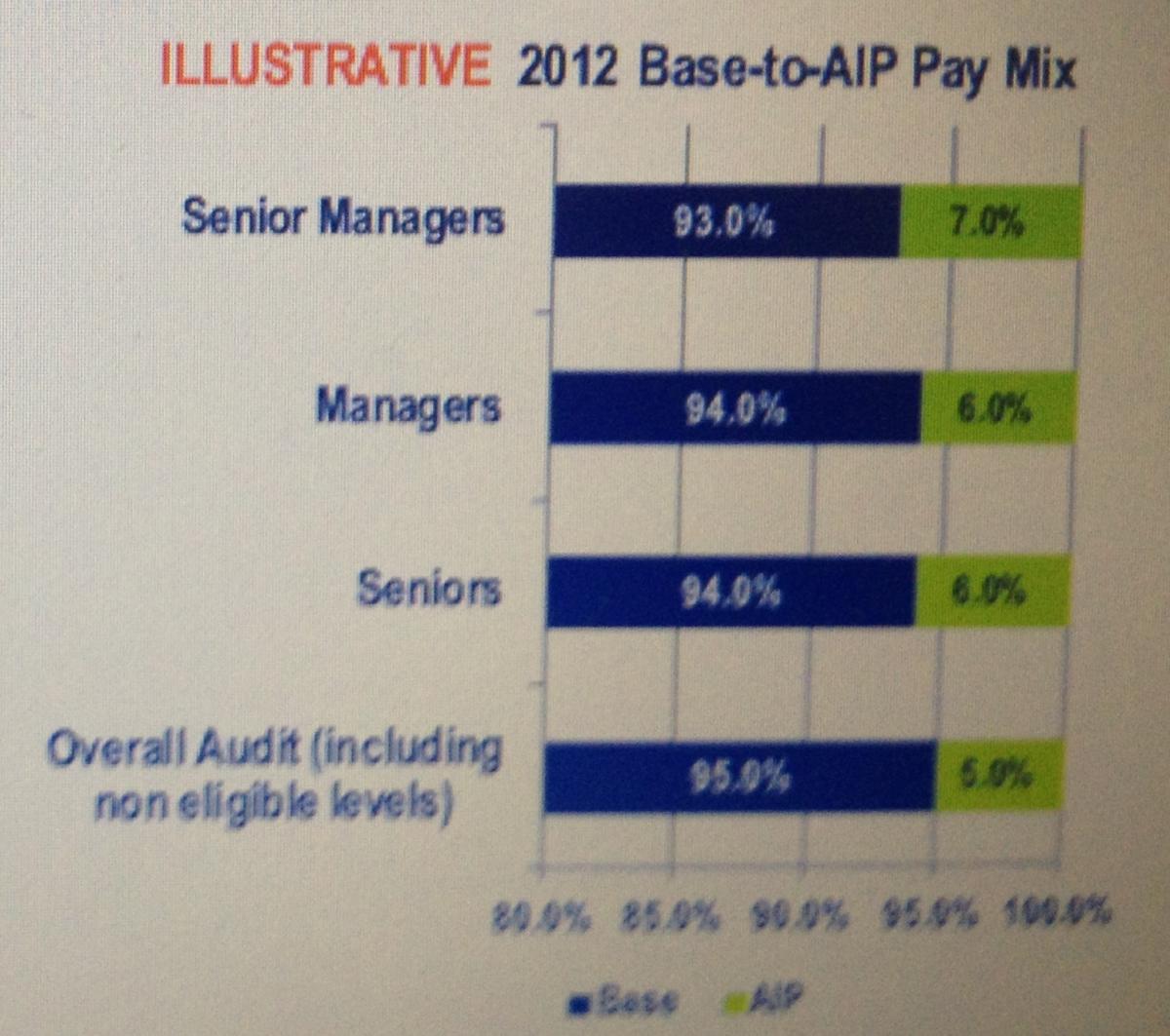 We didn't share this slide in the advisory post, but the audit one is worth publishing because the text notes that the "overall audit" base-to-AIP pay mix 95/5 that you see here is supported by the market data and has been "for the past several years." In other words, auditors shouldn't expect AIP to ever be a substantial part of their compensation. There will be slight growth in AIP as one progresses through the ranks, but it's unlikely that it will reach the 10% level of advisory..

There is plenty to discuss here so reactions are welcome. If you've got similar data for the tax practice, we'd love to see them. Email us.

Deloitte Australia is trying to be transparent by releasing salary data but apparently this tactic isn’t working, not with Daily Mail writing headlines like Young Aussie reveals why many millennials no longer want to work in corporate jobs – after boomers said the generation was ‘lazy and entitled’ that is. Here’s the TikTok that inspired […]

This is the salary Gen Z undergrads expect to earn in their first job right out of college, according to a recent survey by Real Estate Witch. The survey goes on to say: The average starting salary for recent graduates is $55,260, but students expect to earn almost double that — $103,880 — one year out of […]