If you need a good laugh today, I invite you to read this post from WND about how the Clinton Foundation's financial troubles could bring down PwC. It's a hoot.

A respected Wall Street analyst who has been investigating the Clinton Foundation’s finances alleges the “Big Four” accounting firm PricewaterhouseCoopers was a willing participant in a scheme by the Clintons and their associates to become personally enriched by the foundation, a crime known as inurement.
Charles Ortel, a frequent guest on Bloomberg television and a contributor to the Washington Times and others, says in a draft report that he found “the PWC accounting work product for 2013 is riddled with uncorrected errors and falsehoods” as well as procedural defects so severe he has raised the possibility “the Clinton Foundation might be PWC’s Enron.”

First of all, no. Auditors who rely on the work product of others do not simply "accept financial statements without modification."  Second of all, here are the numbers they present as further evidence: 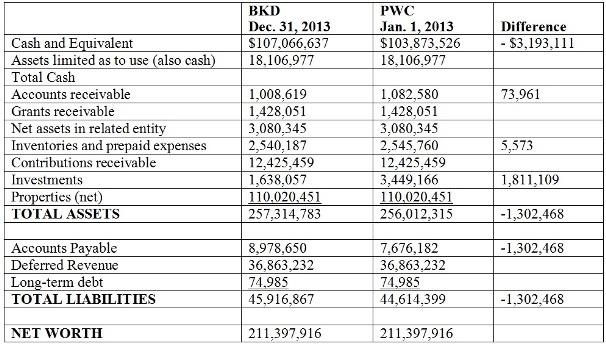 This is where the freaking out begins:

Ortel says the adjustments made by PWC to BKD’s audit of the Clinton Foundation’s financials at Dec. 31, 2012, raise several troubling questions:

Okay, not really but we'll indulge you.

How did $3.1 million in cash disappear?

Cash is by far the easiest asset to quantify and verify – what did BKD miss in its audit and what explains PWC’s conclusion?

BKD didn't miss anything. Accountants and auditors reach different conclusions all the time.

How loose are the financial controls over the Clinton Foundation’s cash accounts at headquarters and in the many foreign locations in which it operates?

Sometimes cash is, like, cash cash. You know, the paper that's stuffed into briefcases and handed over to people in parking garages to make murders look like suicides. Other times cash isn't cash because it's not really liquid, so people — auditors, usually — call it investments. Call it a hunch, but PwC figured that some of this "cash" wasn't really "cash" but instead was "investments," so they reclassified (i.e. moved a few things around) it as "investments."  Accounting can be tricky!

What entities agreed to lower the stated value of obligations owed to them by the Clinton Foundation as of Dec. 31, 2012, and what were the specific reasons for these downward adjustments?

How did the total downward adjustment in liabilities happen to equal precisely the net amount by which the Clinton Foundation’s assets were reduced by PWC as of Dec. 31, 2012?

Sigh. ALL TOGETHER NOW: Debits = Credits.
I suggest that you all go read about this Enron-Watergate love child scandal. You can thank me below.
[WND]

¡Dale! Remember Pitbull? I swear I had Culo on repeat for all of 2004 and some of 2009 when I suddenly got nostalgic for the raspy exclamation of “YEAH!” over and over. Well TB4A posted this last week on Insta… When he sent me this screenshot via Slack my esteemed colleague Jason Bramwell said: “Dude […]