So textbook rental company Chegg went public today. And here's sort of what happened… Chegg priced their IPO at $12.50 a share, which exceeded expectations.

Here's what you really need to know though:

Chegg said it earned $22.7 million in adjusted earnings before interest, taxes, depreciation and amortization, or Ebitda, for the nine months that ended Sept. 30, a metric that excludes certain costs like stock-based compensation. That is up nearly fourfold from results in the period a year earlier.

We initially were paying attention to Chegg because as the "Netflix for textbooks" for the last 8 or so years, a lot of you are probably already familiar with what they've got going.

Of course everyone was like "Chegg is going public in Twitter's shadow" blah blah as if just because they both come from the Internet, and they are going public, they must somehow have something to do with one another. NOT.

Here's what Chegg's first day looked like up until this post, and I'm going to turn this image on its side to better capture what a dick today was to CHGG: 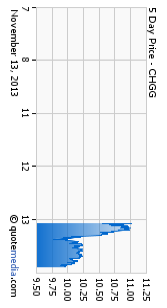 Anyone else see it?

Anyway, basically they got hammered and tanked toward the end of the day.

As of this moment, CHGG is "up" at $9.8199 with a little bit left in the trading day today. Go ahead and start screaming "TECH BUBBLE" at any point now.

That's the problem with putting a value on tech — how many of you benefitted from Chegg's business model? But how does Chegg turn that into profit? Guess we'll see.