Top Ten accountancy firm Baker Tilly has been told to review its audit methodology in light of continuing deficiencies in the quality of its audit work discovered as part of an inspection by the profession's watchdog.

Baker Tilly was also criticised by the FRC for its reluctance to accept recommendations made by the regulator, which found half of the audits it inspected required significant improvements and that progress in improving the quality of its work has been slower than expected.

The FRC found that of the six Baker Tilly audits it reviewed as part of its Audit Quality Inspection Report, three audits required significant improvements; one required some improvement, while two were performed to a good standard.

"We are concerned that, despite additional correspondence with the firm on the issues arising, the firm may not have accepted certain of our findings that led us to conclude that significant improvements are required," the FRC said.

Notice the subtle difference between words the FRC uses and those chosen by our friends at the PCAOB. Yes, they mean the same thing:

We reviewed and assessed the quality of selected aspects of six audits (2010/12: seven audits), of which one was a further review of an audit reviewed in our last inspection which included an assessment of how findings previously raised had been addressed (2010/12: one follow-up review was undertaken).

Two of the audits we reviewed (2010/12: one) were performed to a good standard with limited improvements required and one audit reviewed (2010/12: five) required improvements. Three audits required significant improvements in relation to one or more of the following: the performance of substantive analytical review procedures; the audit of impairments; the reporting of audit differences arising on the audit of the valuation of interest rate derivatives; the audit of IT general controls; and the consideration of the level of overall financial statement risk. Further details are set out below.

An audit is assessed as requiring significant improvements if we had significant concerns in relation to the sufficiency or quality of audit evidence or the appropriateness of significant audit judgments in the areas reviewed or the implications of concerns relating to other areas are considered to be individually or collectively significant. This assessment does not necessarily imply that an inappropriate audit opinion was issued.

Here's a handy chart (A CHART! Why doesn't the PCAOB do this?) that shows Baker Tilly is getting better with the small stuff but really screwing it up on the big stuff: 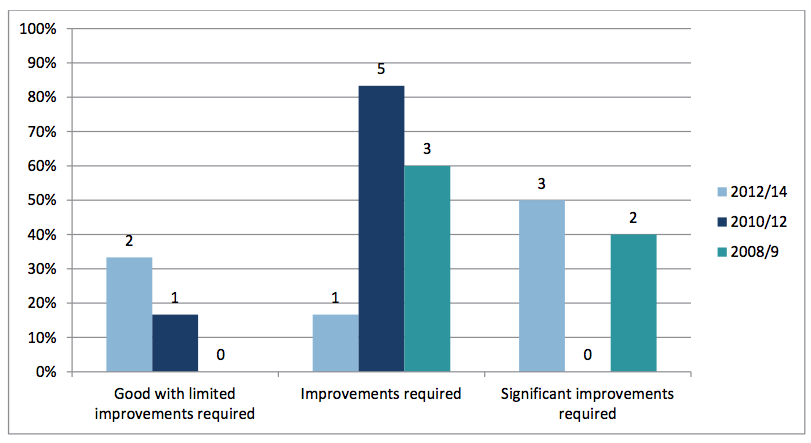 The FRC is trying to work with these guys but, according to the report, Baker Tilly just doesn't get it (shock, I know):

Whilst the firm promotes a commitment to audit quality, audit teams generally focused on explaining why the audit work performed in specific areas was acceptable rather than the improvements that should be made. As a result we are concerned that, despite additional correspondence with the firm on the issues arising, the firm may not have accepted certain of our findings that led us to conclude that significant improvements are required on three of the audits that we reviewed. Whilst action has been or is being taken on certain points raised, the firm needs to recognise the importance of audit teams being more responsive to AQR findings to determine at an earlier stage of the review process the action required to address deficiencies identified in relation to an audit, in order to achieve the necessary improvements in audit quality on a timely basis.

TL;DR: get it the hell together, Baker Tilly.

Thanks to the commenter who brought this to our attention. Accounting firm merger madness continues, this time the union of Citrin Cooperman and Berdon announced on the 1st. We should have seen it coming as Citrin Cooperman has been busy the last 15 months, growing revenue by $200 million and completing several mergers since private […]