Hey, congratulations to all the CMAs out there:

CMAs of all ages earn more than non-CMAs, according to the IMA, which provides the CMA credential. CMAs aged 30 to 39 earn a median salary 49 to 50 percent bigger than non-CMA in the same age range. CMAs believe their certification leads to career opportunities and improves their ability to move across business areas.

CMAs in their 20s earn a 50 percent higher base salary, plus 50 to 61 percent more in total compensation compared to non-certified accountants in their 20s. 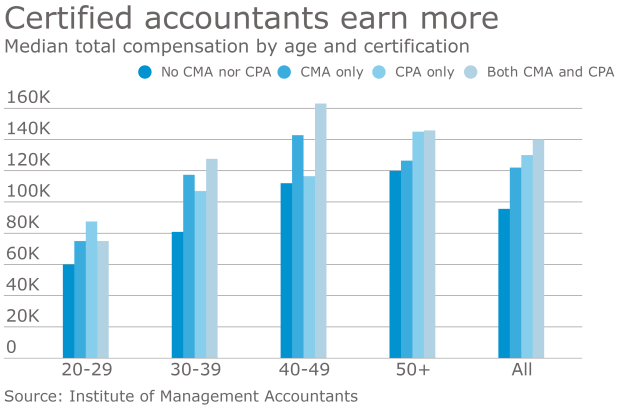 Not pictured: the value-add of the CGMA, although it’s safe to say the chart wouldn’t look much different.

Here’s a CNBC story on the coming battle over the corporate interest deduction, one of the largest giveaways targeted by the GOP in their plans for tax reform:

The Republican blueprint for tax reform would eliminate the deduction, a move the conservative Tax Foundation estimates would boost federal revenues by $1.2 trillion over a decade. That makes it the biggest single corporate pay-for in the GOP proposal — bigger even than the hotly debated border adjustment tax, which would raise $1.1 trillion over the same period.

A new cutely named coalition of businesses called BUILD (Business United for Interest and Loan Deductibility) have gotten together to oppose the repeal of the deduction. Those in favor of eliminating the CID argue that cutting the top corporate tax rate to 20% and “immediate full expensing of capital investments” should help soften the blow.

At their original trial, [Antoine] Deltour was given a suspended 12-month prison sentence and a fine of €1,500. [Raphaël] Hallet got a nine-month suspended jail term and was fined €1,000.

But Wednesday’s appeal court ruling stipulated that Deltour’s suspended sentence should be reduced to six months and Hallet’s should be canceled completely. Their fines were left unchanged.

I think a fun Would You Rather? question could be: 1) One of the LuxLeaks whistleblowers or 2) One of the #Envelopegate partners. Think before you answer.

Brought to you by Accountingfly

This featured job this week is an Audit Senior with Armanino in San Francisco.

Bryce Sanders wrote about adjusting to a new boss after a merger or reorganization. Megan Lewczyk wrote about handling a Facebook friend request from a superior. In Open Items, someone is pondering their next move after spending 5 years in the insurance industry.