I missed this HBR article from earlier in the month, but it's about money, so I figure it's worth covering.

I missed this HBR article from earlier in the month, but it's about money, so I figure it's worth covering.

PayScale surveyed over 71,000 employees about "the relationship between pay and employee engagement" and the results are pretty interesting:

The study results revealed that one of the top predictors of employee sentiment, including “satisfaction” and “intent to leave,” was a company’s ability to communicate clearly about compensation. In fact, open and honest discussion around pay was found to be more important than typical measures of employee engagement, such as career advancement opportunities, employer appreciation and future enthusiasm for the company.

Makes sense to me. During my time in accounting , my understanding of market pay, and whether or not I was receiving a salary anywhere near it, was pretty poor. Part of that was my own fault, but I have no problem heaping some blame on my employers. The conversations around my pay were brief and occurred completely within a vacuum so I assumed I was underpaid. This isn't helpful! And it's still going on! Check out this chart: 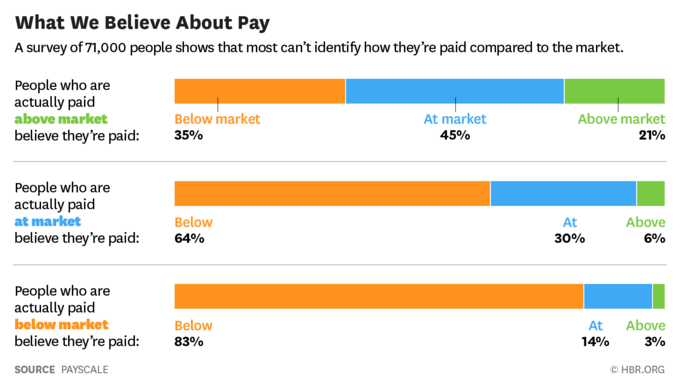 Looks about right. Most people think they're undervalued and this perception leads a lot of people to conclude that they should leave for greener pastures:

This may sound obvious, but our survey showed that “intent to leave” decreased in relation to how favorable an employee felt about their pay. For example, 60% of employees who perceived they were underpaid said they intended to leave, compared to only 39% of those who perceived they were overpaid. The bottom line is this: if you don’t communicate to your employees that they are being paid fairly compared to their talent market, they may leave.

However! If you're a firm that can't pay as well as the competition, you can improve your position by communicating why that is the case:

[T]ransparent conversations about money can actually mitigate low pay. So, if an employer pays lower than the market average for a position, but communicates clearly about the reasons for the smaller paycheck, 82% of employees we surveyed still felt satisfied with their work.

My suggestion: Take a 100% transparency approach (including partners) with full explanation. Break out the spreadsheets if you have to! If you think that's ridiculous, it's not far off from the author's suggestion:

These discussions should not only show employees how their pay was determined, but also how pay relates to performance or responsibility, and what it takes for an employee to get to the next pay grade.

This is another example of something firms struggling to find and retain talent could do, but won't. Much like the culture of up-or-out, secrecy around pay seems to be engrained in most firms. Despite plenty of evidence that supports more transparency around pay, I have my doubts about accounting firms actually embracing it.

Most People Have No Idea Whether They’re Paid Fairly [HBR]

Deloitte Australia is putting it all out there and revealing exactly how much its people make. Australian Financial Review reports: Deloitte Australia chief executive Adam Powick has revealed the minimum pay rates for the firm’s audit and consulting divisions as part of a strategy to be more transparent with staff and attract more skilled professionals. […]

CPA Canada has shared some Canadian accounting firm hiring trends worth keeping an eye on. Among them? Ditching bonuses. Despite their longtime presence in the traditional CPA compensation package, bonuses are being abandoned in some firms, notes Adele Harraway, managing partner, Canadian Accounting Consultants, which specializes in CPA recruitment. Instead, firms are upping the starting […]