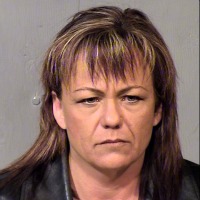 Generally speaking, accountants are in demand. So much so, perhaps, that prospective employers might overlook small details when hiring one, such as that accountant still being on probation for stealing from a former employer.

You see, Michelle was fired from a third-party accounting firm in October after the IRS told the Buckeye Veterinarian Clinc — to which Hice was offering her top notch accounting and payroll skills — they owed a few bucks in unpaid taxes. When the vet clinic handed over their books to the Maricopa County Sheriff's Office, everyone figured out that Hice may have written somewhere in the ballpark of $130,000 in checks to herself.

But wait, it doesn't end there! A subpoena of Hice's bank statements in the course of the investigation revealed $25,000 magically appeared in Hice's account from a local church that hired her to do their accounting for $300 a month.

When she was arrested Wednesday, authorities found a handgun and two stolen credit cards. Authorities believe there may be more businesses involved and she faces four felony counts.