Latest
Here’s How Much Auditors and Consultants at Deloitte Australia Make Happy 125th Birthday, KPMG! Los Angeles Might Outsource Its 211 Phone Service to Deloitte and People Are Not Happy Compensation Watch ’22: Did Huge Revenue Boost = Better Raises For BDO USA Employees? The Accounting Profession is Scaring Away Gay People (and Lesbians, and Transgender People, and…)

The big news that came out of last year’s Cornerstone Research report on securities class-action lawsuits involving accounting allegations was that total settlement value reached nearly $4.5 billion in 2018, the second highest total in the past decade. The big news out of this year’s report is that there were a record number of accounting-related securities class actions filed in 2019.

Plus, the total number of accounting case filings in 2019 was nearly double the 2010-2018 average of 86 AND accounting made up the highest percentage (42%) of total class-action filings since 2011, as you can see in the bar graph below. 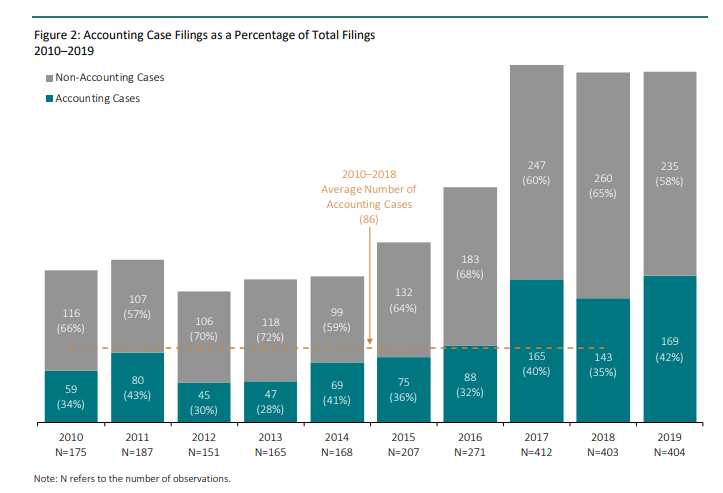 The wave of accounting-related class actions last year was due to increases in both core filings (5%) and those related to mergers and acquisitions, specifically failing to reconcile a non-GAAP measure to a GAAP measure (29%), Cornerstone Research said.

And M&A accounting case filings skyrocketed in the second half of 2019, increasing from 37 in the first half of the year to 65 in the second half—the most in any semiannual period in the past five years, according to the report:

M&A accounting cases constituted 75 percent of all M&A cases in the second half of 2019 compared to approximately 50 percent in the first half of the year. This is the highest proportion for any half-year period.

Now, on to class-action settlements in 2019. The number of accounting case settlements continued to decline, from 41 in 2018 to 34 last year, according to the analysis. And accounting class actions are no longer a billion-dollar business:

Here’s a chart from the report that summarizes filings and settlements in 2019 compared to 2018: 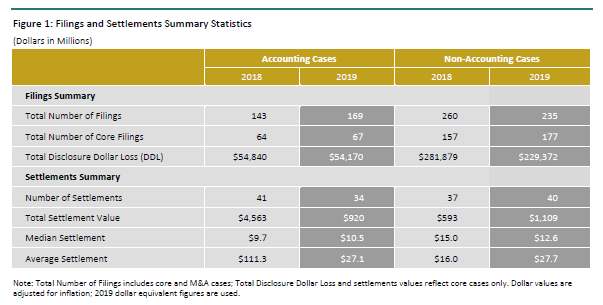 Other highlights of the report include:

What are researchers keeping an eye on for next year’s report? If the COVID-19 pandemic will impact future securities litigation trends. Elaine Harwood, vice president of Cornerstone Research, said:

“Regulators and others are already focusing on the impact of COVID-19 on financial reporting disclosures and processes. We will continue to monitor these developments to determine whether they translate into accounting allegations in future securities class action filings.”

Accounting Class Actions Are Once Again a Billion-Dollar Business

Here’s How Much Auditors and Consultants at Deloitte Australia Make