Here’s some good news for the 300 new auditors Grant Thornton in the U.K. is expecting to hire within the next 12 months: You can’t be any worse than the auditors GT has employed in recent years.

The Financial Reporting Council released its annual audit inspection reports for the Big 4 firms, as well as for Grant Thornton and BDO, on July 10, and while KPMG was taken to the woodshed last summer for its horrible audit quality, this year is Grant Thornton’s turn, as the FRC said the firm will be “placed under increased scrutiny due to sustained poor results.”

In addition, only 75% of the audits of FTSE 350 companies for the year ending December 2017 met the 90% audit quality goal, and the FRC found cases in all firms where auditors had failed to challenge management sufficiently on judgmental issues.

“At a time when the future of the audit sector is under the microscope, the latest audit quality results are not acceptable. Audit firms must identify the causes of their audit shortcomings and take rapid and appropriate action to improve quality. Our latest results suggest that they have failed to achieve this in recent years.”

So, how bad was Grant Thornton’s inspection findings?

[T]he FRC assessed that 50% of reviews were good or required limited improvements, compared to 75% last year. In total, 26% of Grant Thornton’s audits reviewed in the past five years have required significant improvement. The FRC has therefore increased its scrutiny of Grant Thornton, including: requiring a new audit quality improvement plan and increasing the number of audits to be inspected in 2019/20.

Here’s a graph showing how GT’s audit quality has, for the most part, been kinda shitty the past five years: 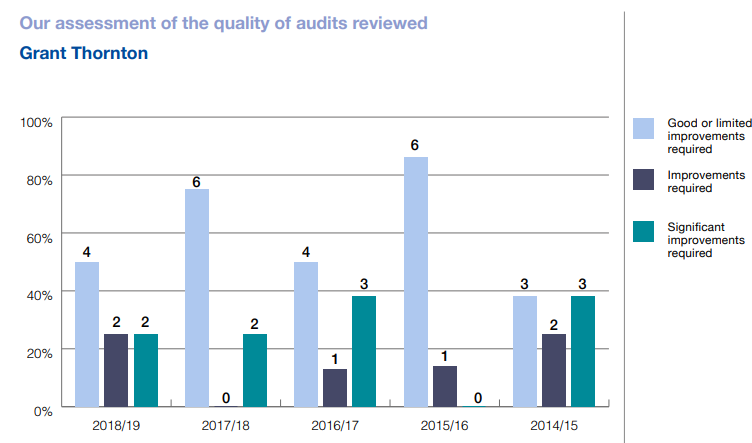 Anyone who has closely followed the audit scene in the U.K. for the past year or two shouldn’t really be surprised by GT’s dismal results. This is the firm that has been under investigation by the FRC for its auditing of Patisserie Valerie, the cafe chain that was mired in a huge accounting fraud in which accounting irregularities, which have now totaled £94 million, were first discovered in October 2018.

Grant Thornton is trying to do some damage control, announcing new hiring and audit quality improvement plans last month to try to improve its tarnished reputation.

Of the Big 4 firms, PwC was found to have the worst audit quality among FTSE 350 company audits, with only 11 of 17 being good or requiring limited improvements.

The deterioration from 84% to 65% in the results for PwC’s FTSE 350 audits inspected is unsatisfactory and the FRC has required the firm to take prompt and targeted action to address this decline. In June 2019, PwC announced an action plan to strengthen its focus on audit quality. The plan includes additional investment in people, training and technology, structural changes to PwC’s business, and a reinforced focus on culture and quality control. The FRC will scrutinise closely the implementation of this plan.

PwC said last month that it was splitting its current assurance practice into two distinct businesses, and that it would spend an additional £30 million ($38.1 million) a year to improve audit quality. As part of the changes, the firm plans to set up a new national digital audit team and hire more than 500 auditors.

However, the FRC said today that KPMG “remains subject to increased FRC scrutiny” and that will continue “until KPMG has demonstrated a sustained improvement in audit quality.”

What about Deloitte and EY? Of Deloitte’s 16 FTSE 350 audits reviewed, 75% were good or required limited improvements, down from 79% the previous year. At EY, 89% of its FTSE 350 audits inspected met the required standard, up from 82% last year.

And at BDO, 88% of its audits inspected were considered acceptable, the same as the previous year.

It‘s been awhile since we paid attention to people leaving Grant Thornton for KPMG and vice versa, but this news that was made public yesterday is a biggie: well-known Grant Thornton Chief Economist Diane Swonk turned in her purple rose after more than four years with the firm and has joined the House of Klynveld […]