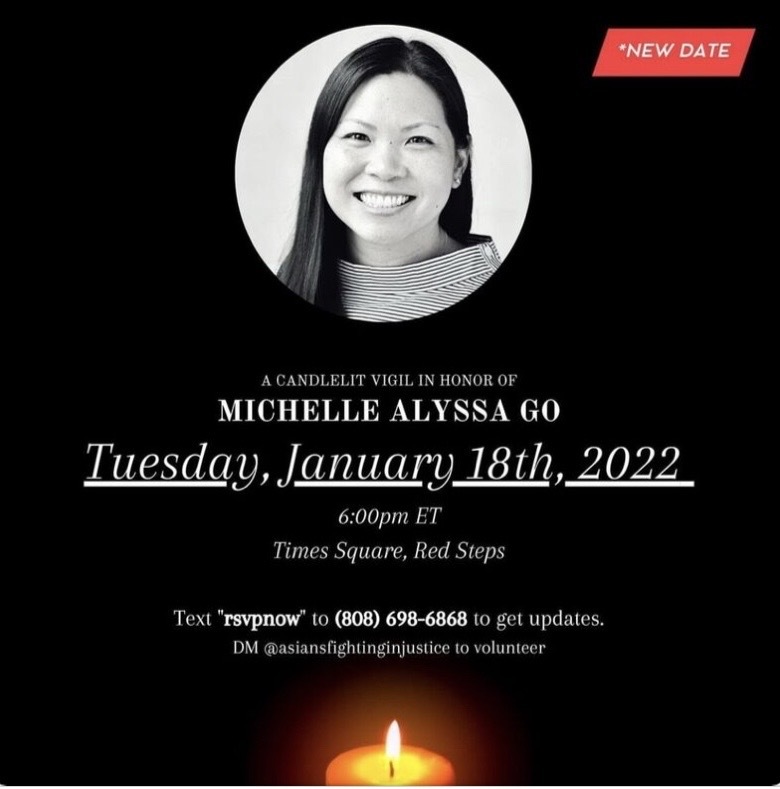 I heard about this awful news over the weekend but didn’t realize until yesterday that the victim, 40-year-old Michelle Go, was part of our accounting stratosphere.

On Saturday morning, Ms. Go left her apartment on the Upper West Side and was about to step onto a subway in Times Square when a 61-year-old man pushed her from behind, the police said, shoving her to her death in front of a southbound R train.

Screams echoed through the station just after 9:30 a.m., a witness said, and the killing sent shock waves through a city already on edge nearly two years into a pandemic.

Go, a native of Fremont, CA, was pronounced dead at the scene. The attacker, Simon Martial, 61, was charged with second-degree murder, according to a CBS News report. Police said Go didn’t provoke Martial and the two had no interaction before Martial pushed her to her death.

The Times reported Martial, who served two prison terms for robbing taxi drivers while threatening use of a gun, rode a train to Lower Manhattan, where he told officers at the Canal Street station that he had pushed a woman onto the tracks. Police said Martial was homeless, and his sister told the New York Post that Martial was mentally ill, having been diagnosed with schizophrenia, and shouldn’t have been free to walk the streets.

Go, who graduated from UCLA with a bachelor’s degree in economics and then earned her MBA from NYU Stern School of Business, was a senior manager, strategy and operations, M&A at Deloitte Consulting, according to her LinkedIn profile. She joined Deloitte in 2018.

Deloitte posted the following about Go on its website and included information on a candlelight vigil that will be held in her memory later tonight in Times Square:

It is with deep sadness that we share the news that our colleague, Michelle Go, lost her life in an unthinkable tragedy. Michelle, a Consulting senior manager, was killed when a stranger inexplicably pushed her in front of an oncoming NYC subway train. We are shocked and profoundly saddened by the devastating loss of our colleague in this senseless and horrific act of violence. Our hearts go out to Michelle’s family and friends and we are doing all we can to support them during this terribly painful time. All of us in the Deloitte family are hurting right now, and we have seen a particularly strong outpouring from members of our New York City community and members of our Asian community.

Michelle made a tremendous impact during her life and career. She joined Deloitte almost four years ago, bringing with her a wealth of experience and a genuine passion for developing others. Throughout her impressive career, Michelle served many domestic and international clients across M&A, Restructuring, and Finance with excellence. Michelle was a trusted leader who always shared her honest opinion and would go above and beyond to deliver excellent outcomes. From the warm welcome and anecdotes she shared at Deloitte new hire sessions, to her efforts to broaden the representation of women in M&A through the Women in M&A program, Michelle was someone who was constantly thinking of how to enhance the talent experience.

Perhaps Michelle’s greatest legacy was that she was fearless and believed life was to be lived and you should make the most of the time you have. Whether she was traveling around the world, watching her beloved UCLA Bruins, doing work in the community, or spending time with her friends and family, she was making an extraordinary impact on everyone around her.

Michelle was a wonderful human being who was known for her excellent client service, quick wit, and bringing her authentic self in all that she did. We miss her dearly and her light has and will continue to have a profound impact on all of us.  ~ Trevear Thomas, US Leader, M&A Services

Michelle was a bright, pragmatic, inquisitive and thoughtful role model for all of us. Michelle always brought her experiences and energy to bear and didn’t hesitate to go above and beyond the call of duty, both in her professional and personal life.  ~ Chelsea Gorr, Managing Director, M&A Consultative Services and Ranjit Rao, US Finance & Enterprise Performance Leader

A candlelight vigil to honor Michelle’s life has been planned for 6pm ET on Tuesday, January 18, at the Red Steps in Times Square in New York City.

Furthermore, as we continue to cope with this devastating loss, we will be hosting a Reflections Conversation on Wednesday, January 19, to honor Michelle’s incredible life and legacy. We are also in the process of evaluating how best Deloitte can honor Michelle’s life by making significant contributions to causes in the community that she selflessly devoted so much of her energy to advance.

This loss is painful and truly heartbreaking for all of us—especially for those who knew and worked closely with Michelle, and most importantly, for her family and friends. We understand this likely affects you personally in different ways and may create a grief that can be hard to process. We encourage you to take advantage of helpful resources, including 24-hour access by phone to our licensed mental health professionals.

Please keep Michelle’s family in your thoughts and prayers during this sad and difficult time and continue prioritizing the well-being of yourselves and your families.

In addition, several of her Deloitte colleagues posted messages of remembrance on LinkedIn: 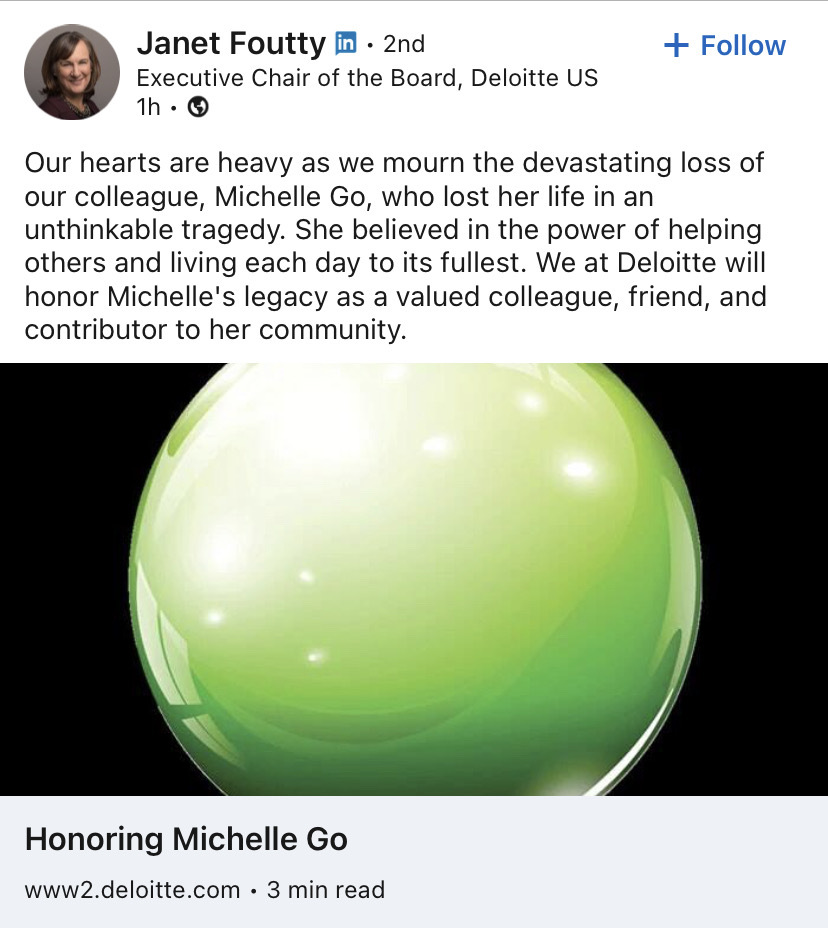 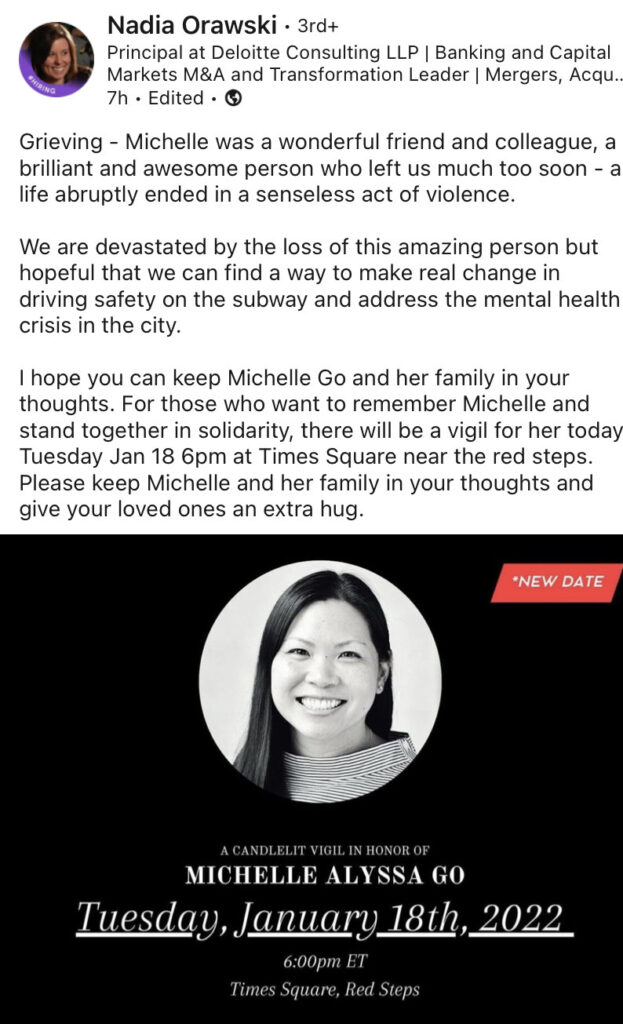 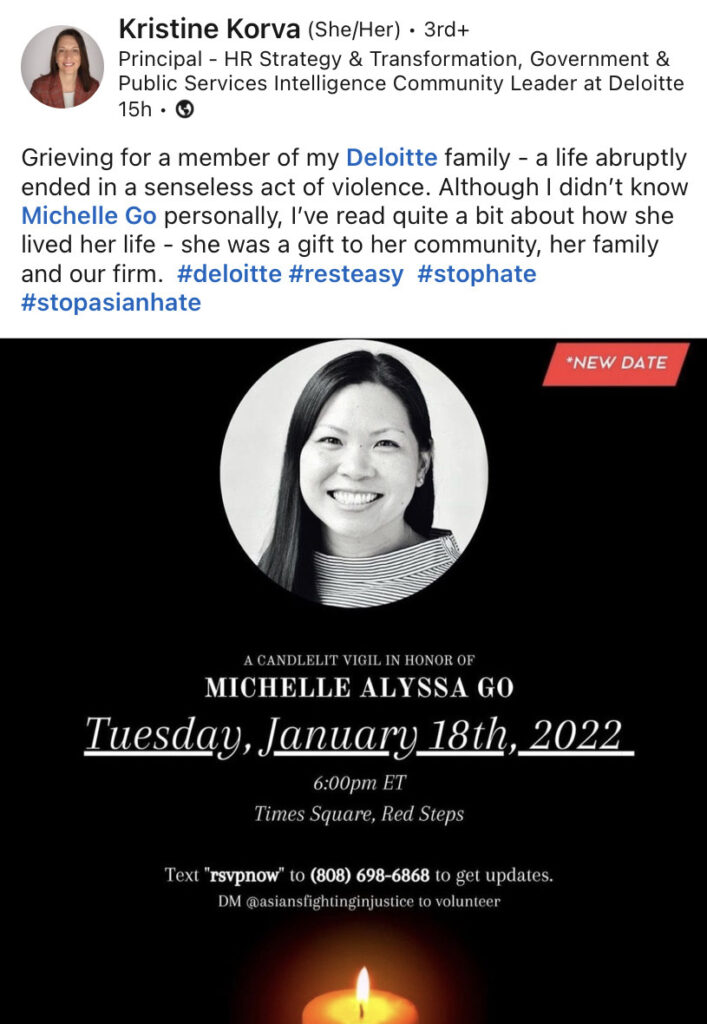 Go also was an avid volunteer, according to CBS News:

The New York Junior League says Go worked with the organization’s community partners, serving under-resourced and at-risk communities. Go served on a committee for a preventative health education initiative and another committee with the goal of empowering adults on the path to independent success.

Those who worked with Go called her “compassionate” and “instrumental” to their work.

At the building where she lived, neighbors described her as smart, intelligent and extremely kind.