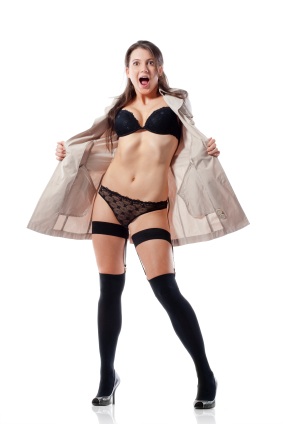 Today in bizarre sexual encounters with government employees news, a Fall Creek, Oregon man has filed a lawsuit against an IRS agent for "coerc[ing] him into having sex with her after suggesting that the liaison could keep him out of tax trouble."

Dora Abrahamson claims to have known Vincent Burroughs when she called him to inform that he was being audited. According to the suit, Burroughs didn't remember her, but that didn't stop Abrahamson from sending him suggestive text messages, flirting with him over the phone and "at one point sent him a photo of herself in her underwear."

And just about the time Burroughs may have thought that this situation couldn't more resemble a scene from "I'm From the Government and I'm Here to Examine Your Assets", it did!

Burroughs did not respond to Abrahamson’s initial advances, according to the lawsuit. But he gave in after a “provocatively attired” Abrahamson arrived at his home in September 2011 and propositioned him, the lawsuit states. “She told (Burroughs) that she could be a bitch, or that she could be nice,” the suit states. “She said that she could impose no penalty, or a 40 percent penalty, and that if he would give her what she wanted, she would give him what he needed.” Burroughs had sex with Abrahamson that day “as a result of (her) coercive conduct,” according to the lawsuit.

Burroughs did not initially report this "excessive intrusion on his person" because "of embarrassment and fear that she would cause substantial financial penalties to be imposed upon him.”
This is ridiculous of course. The IRS would never employ audit procedures that would risk being enjoyed by the auditee. You have to figure that Burroughs just had a stroke of bad luck.
Fall Creek man’s lawsuit alleges coercion by IRS agent [TRG]

This lady is going to be on hold for a long time, her phone isn’t even plugged in to the wall. The GOP-led House voted 221-210 on Monday to eliminate almost 90 percent of $80 billion in new IRS funding under the Inflation Reduction Act, much of which is supposed to be used to fund […]

Bad News For Big 4: Educated Men Have Decided to Not Work So Hard