If time spent consecutively looking at spreadsheets, eating hours, and submitting timesheets late were Olympic events, accountants would be among the strongest contenders for a gold medal during the summer games in Tokyo. But there have actually been accounting Olympians—Gwen Jorgensen and Alexandre Bilodeau to name two—who have had gold medals placed around their necks during the Summer or Winter Olympics. And if pickleball ever becomes an Olympic event, this ex-Deloitter would surely be a medal favorite.

At the summer games in Tokyo going on right now, there are five athletes that we know of—a former Deloitte consultant, a current Crowe tax staffer, two consultants at EY in Australia, and a consultant at Deloitte in Germany—who are competing on the sporting world’s biggest stage.

Unfortunately for Gerek Meinhardt, the top seed in the Olympic men’s foil individual tournament who is ranked second in the world, he lost his opening match to Russian Vladislav Mylnikov (ranked 124th in the world) 15-11 on July 26. Not the ideal outcome for the odds-on favorite to win America’s first men’s fencing gold medal in more than a century.

But the four-time Olympian, who won a bronze medal in the 2016 Summer Olympics in Rio de Janeiro in the men’s team foil event, has still had a great Olympics thus far. Why? His wife, Lee Keifer, became the first-ever American woman to win a gold medal in individual foil on July 25.

My wife just made my #Olympics dream complete @leetothekiefer 🥇GOLD

Words can’t describe how bad she wanted this, how hard she worked, or how proud of her I am.

Thank you ALL for the incredible words of support. We felt each one of them. @TeamUSA @USAFencing HISTORY!!! pic.twitter.com/RGbBc8U4dB

Meinhardt, 30, is currently a student at the University of Kentucky College of Medicine, as is his wife. But before he had aspirations of becoming a doctor, Meinhardt spent a short time in D-town, according to the Wall Street Journal:

Once the youngest American man ever on the Olympic fencing team, he also went to Notre Dame and left with two NCAA titles, a business major, an MBA and sights on an entirely different line of work. When he went to Rio de Janeiro in 2016, Meinhardt had a full-time job as a Deloitte consultant. By the time he and Kiefer married in 2019—an occasion known in their world as the Royal Fencing Wedding—his mind was set on medical school.

According to his LinkedIn profile, Meinhardt worked as an advisory consultant, specializing in risk analytics, at Deloitte in the San Francisco Bay Area from September 2015 until August 2016.

Meinhardt still has a chance to medal in the men’s team foil event starting Aug. 1. The U.S. men’s team are favorites to win gold.

[UPDATE] Gerek Meinhardt got a medal but it wasn’t gold. After a close loss to the Russian Olympic Committee in the semifinals, the U.S. men’s foil team—Meinhardt, Alexander Massialas, Race Imboden, and Nick Itkin—came back to beat Japan 45-31 in the bronze medal match. It is his second bronze medal, having been on the U.S. men’s foil team that came in third at the 2016 Summer Olympics in Brazil.

Peter Wetzlar hits the pool for the first time on July 27 in the men’s 100-meter freestyle, representing his home country of Zimbabwe. However, the 24-year-old lives in Kentucky and works at Crowe’s office in Lexington as a tax staff. 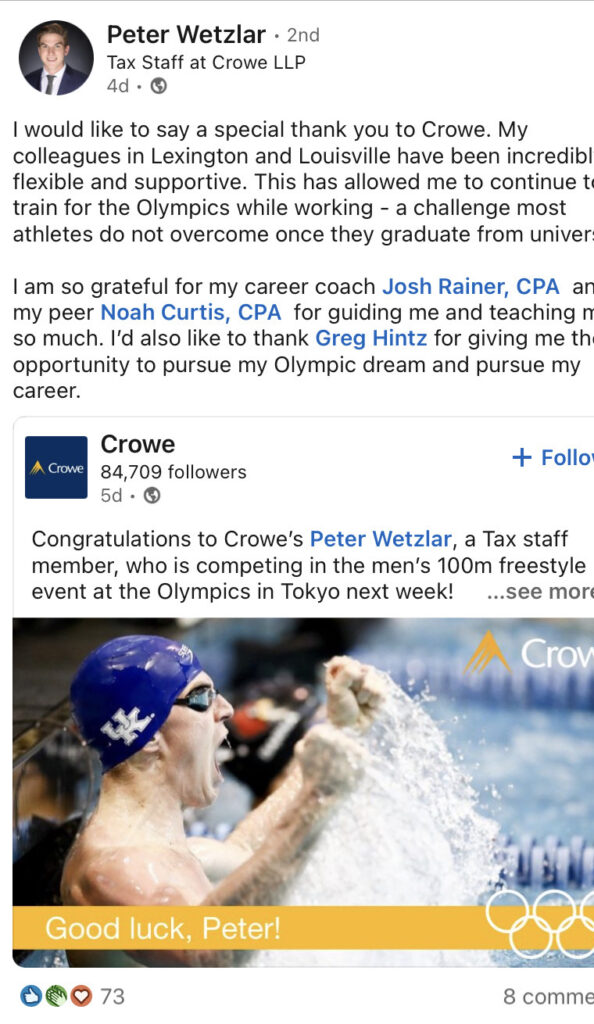 We’ll update this post once we know how Wetzler does in Heat 4 of the men’s 100-meter freestyle tomorrow, as well as the outcome of the men’s team foil event.

[UPDATE] Wetzler finished fifth in his Heat 4 race on Tuesday and did not advance to the semifinals; however, he did break his own record for fastest time by a Zimbabwe swimmer in a men’s 100-meter freestyle competition. His time on Tuesday was 50:31 seconds, beating his previous record time of 50:50 seconds in 2019.

EY in Australia now has a gold medal winner within its ranks. Jessica Morrison, a senior consultant at EY, won gold in the women’s coxless four crews rowing event on Wednesday morning along with her teammates Rosie Popa, Lucy Stephan, and Annabelle McIntyre.

Morrison even got a shout-out on LinkedIn from the big boss at her firm: 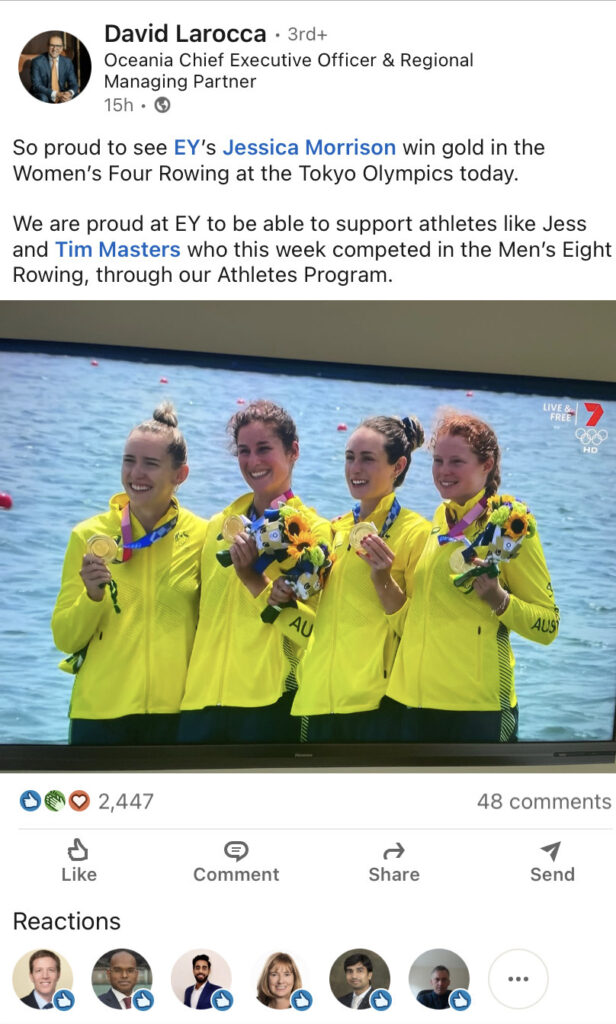 Morrison, 29, who joined EY as a consultant in May 2018, is also competing in the women’s coxless pair event which begins on July 29. We’ll update this post to let you know how she did.

As David Larocca mentioned in his post congratulating Jessica Morrison on LinkedIn, another rower from EY Australia, Timothy Masters, competed in Tokyo this week.

In the men’s eight rowing event on July 28, Masters and his seven Australian teammates finished fourth in the qualifier, which advanced the team to the finals on Friday when they’ll compete against New Zealand, Germany, the Netherlands, Great Britain, and the U.S.

Masters has worked at EY for nearly five years as a consultant, according to his LinkedIn profile.

We’ll update this post when we know the results.

Deloitte consultant Oliver Zeidler has Olympic blood running through his veins. His grandfather, Hans-Johann Farber, represented Germany in rowing at three Olympics from 1968 to 1976, winning gold in the men’s four in 1972 and bronze in the same event in 1976. His uncle, Matthias Ungemach, represented Germany at the 1992 and 1996 Olympics, finishing fourth in the men’s four in 1992, while his aunt, Judith Zeidler, competed in the sport at the 1988 and 1992 Olympics, winning gold in the women’s eight in 1998 and bronze in 1992.

So it was Oliver’s turn to compete on the Olympic stage this year, taking part in the men’s single sculls rowing event. The 25-year-old Zeidler ended up finishing seventh in the event.

He expressed his disappointment with the result on Instagram: 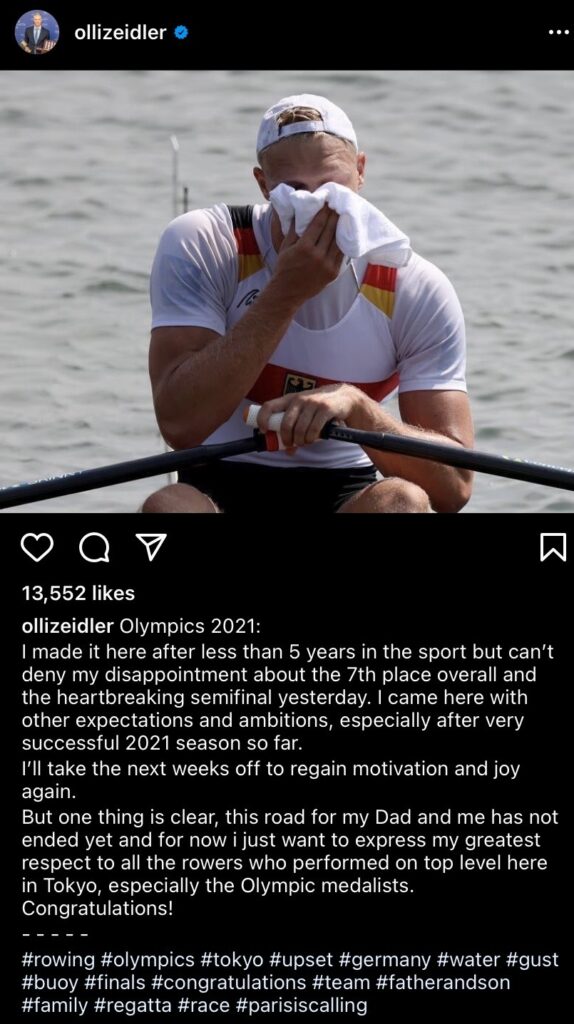 Zeidler, who says on his LinkedIn profile that he is a tax specialist, has worked at Deloitte in Munich since July 2015.

If we’ve missed another current or former public accountant who is competing in Tokyo, let us know by using the contact information below.