Latest
The IRS Is Paying an Unwelcome Visit to Alliantgroup (NEW UPDATE) Dhaval Finally Emailed His Troops It’s Official, the Only Way to Get a Decent Raise Is by Leaving Your Firm Former and Current Alliantgroup Employees Speak Out About ‘Evil, Toxic, Emotionally Damaging Company’ Which Big 4 Firm Had the Most Elijah Watt Sells Award Winners in 2021? Are You Future-Ready? Learn How to Get There at This PICPA Event

The Queen’s EY recently released its 2020 Pay Gap Report, and the good news is the gender pay gap among EY U.K. staff is slowly closing, but the bad news is the ethnicity pay gap is growing.

I am pleased that our gender pay gap has improved by 4.7%, achieved by both recruiting and promoting women, particularly at senior levels. Our ethnicity pay gap has widened by 1.9%, largely due to an increase in the number of ethnic minority graduates we employed this year.

The median gap between what EY’s male and female staff earn is now at 15.3%, but the pay gap is 15.8% for ethnic minority staff.

There’s also a section about bonuses in the report. According to EY, 66.8% of women received a bonus last year, compared to 62% of men. In addition, 52.5% of ethnic minority staff got a bonus, compared to 70.1% of white employees.

Here’s some other pay gap data the Black and Yellow included in its report: 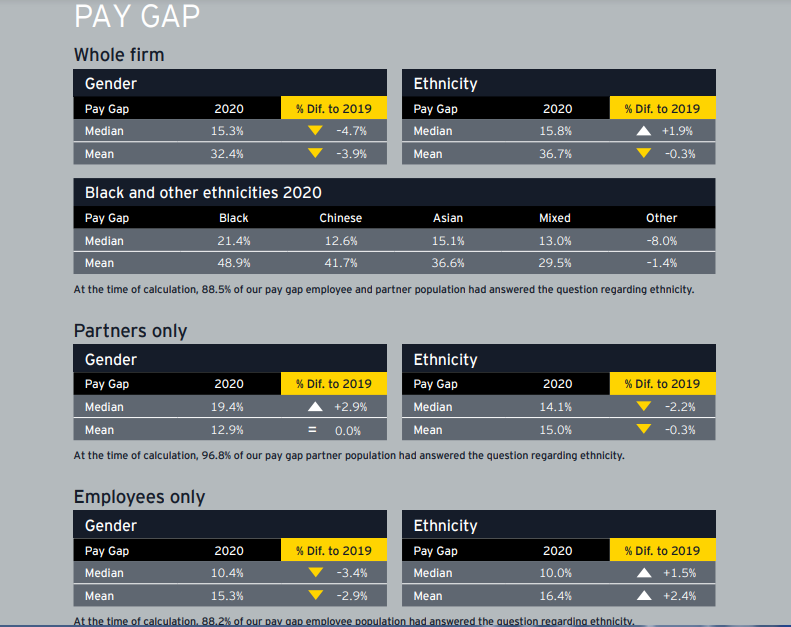 [UPDATE 12] Alliantgroup co-founder and CEO Dhaval Jadav, who apparently hasn’t been at work since the IRS and the FBI raided his business’s Houston headquarters last Friday morning, sent an email to all Ag employees at about 10:20 p.m. Wednesday night with the subject line: To Our alliantgroup Family. Several sources have sent us the […]

It’s Official, the Only Way to Get a Decent Raise Is by Leaving Your Firm