Whew, you guys, this one is … awkward. Scott Vetere is a 39-year-old father of three from Michigan who serves as assistant coach for the University of Michigan women’s gymnastics team, or at least he did until he resigned Oct. 15. His resignation came after Vetere was caught getting it on with an 18-year-old female gymnast in a parking lot. Both Vetere and the young woman — who the Detroit Free Press chose not to identify — have been charged with committing an indecent or obscene act in public, which could cost them up to 90 days in jail and a $500 fine.

“Mr. Vetere was immediately suspended the day we learned about the incident (Oct. 10),” U-M athletic department spokesman Kurt Svoboda told the Detroit Free Press in an email. “He resigned from his position Oct. 15 during the disciplinary review process.”

The two were arrested Oct. 8 when police witnessed them practicing naked gymnastics in a vehicle parked at an Ann Arbor apartment complex. *snicker* Come on bro, get a room. It’s the Midwest for Chuck E. Cheese’s sake, you could probably have gotten halfway decent Holiday Inn digs for like $20.

Vetere is an accomplished athlete in his own right, being named Male Athlete of the Year at the University of Michigan in 2000. In a 2004 profile on Michigan’s website, he talks about planning to get a law degree; however, according to his LinkedIn profile, he got a Masters in Accounting from Wayne State instead. From there, he started with KPMG in 2009 as an audit associate, a position he held for a year before moving over to recruiting, which he’s been doing for eight years. 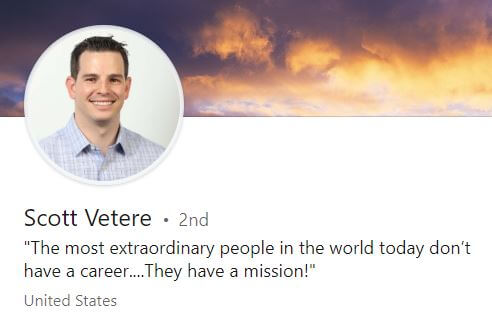 According to the profile, Vetere recruits experienced hires for IT risk advisory.

We contacted KPMG for a statement, which we’re still waiting on. We’ll update if/when we receive one.

UPDATE: A KPMG spokesperson informs us that Vetere left the firm in 2017. We have updated the title to reflect this, and humbly suggest Scott do the same to his LinkedIn profile.