Latest
Which Big 4 Firm Had the Most Elijah Watt Sells Award Winners in 2021? The IRS Is Paying an Unwelcome Visit to Alliantgroup (UPDATE) Alliantgroup Responds; Employees Returned to Work on Tuesday Are You Future-Ready? Learn How to Get There at This PICPA Event Friday Footnotes: Which Firm Puts in the Most Hours?; Clients Pay for the Talent War; Spotting Burnout | 5.20.22 Guy Blames Failing the CPA Exam on Why His Clients Got Busted for Bank Fraud and Tax Evasion

Gather ’round, kids, we’re going to talk about accounting salaries.

The other day, Business.org came out with a report on which states (plus the District of Columbia) pay accountants the best and the worst. To do this, the site said it used data from the Bureau of Labor’s annual occupational employment stats and compared each state’s average accounting salary to the state’s average salaried worker to compile its ranking.

Now before you accountants in Maryland bitch about why the state’s average annual salary of $81,920 is $16,500 more than the average annual salary for accountants in Mississippi but Maryland is considered one of the worst-paying states and Mississippi is considered THE best, take into account one of your favorite acronyms that you use when asking questions about salaries among your peers on the usual chatter sites: COL.

But just as with any career, accounting’s profitability differs from state to state. For instance, accountants in Washington, DC are paid a higher salary than accountants anywhere else in the nation. But with DC’s higher cost of living—and the fact that DC accountants make only 15.7% above the average salary there—DC is actually the worst area for accountants who want their dollar to go as far as possible.

In contrast, Mississippi ranks first on our list, with accountants there making 63% more than the average salaried worker in the state. That’s an average wage of $65,420, which goes pretty far in the state US News just named the most affordable in the US.

So with all of that said, here’s a map showing each state’s (and DC’s) average accounting salary and where the state ranks in Business.org’s report: 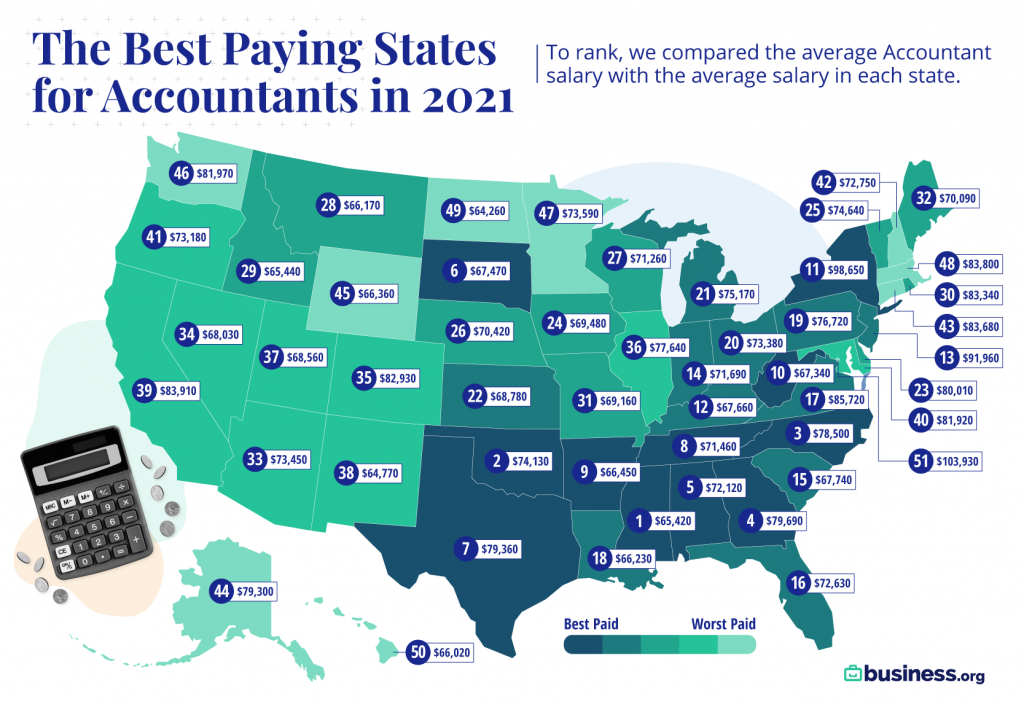 And if you were looking for an additional breakdown of average accountant wages vs. the wages of an average salaried worker per state, you can find it here. But here’s the top 10 states and the bottom 10 states (11 including DC):

IDK, these types of accounting salary studies by state don’t really seem to elicit much enthusiasm or reaction than, say, ones that focus on firms in individual cities, but go for it if you feel like shouting something out about it.

[UPDATE 11] Alliantgroup employees in Houston returned to work on Tuesday morning after they were sent home early Friday following the court-ordered raid of their office on May 20. Thanks to a tipster, here is the email they received Sunday evening from Kim Allen, senior director of talent: Our tipster commented: “This reads like a […]