Latest
The PCAOB Has Had It With Shoddy Audit Work Performed by Affiliates Fat Joe is Suing BDO The SEC Is Finally Going After People With Cartoonish Butt Implants Who Shill Shady Crypto ‘Investments’ When it Comes to Global Revenue, PwC is Still Deloitte’s Bi*ch Immigrants Aren’t Ethical and Don’t Properly Report Their Income, Says Guy Who Reads Accounting Today

She isn't the first industry refugee and she won't be the last. As many of you are chomping at the bit looking for a way out while trudging closer to the end of busy season, it's worth looking at all of your exit opportunities.

In an episode of LOGO's That Sex Show (sorry for my bad taste in TV, they run RuPaul's Drag Race AND 16 and Pregnant, I can't get enough), Miss J Alexander admitted to being a former accountant. 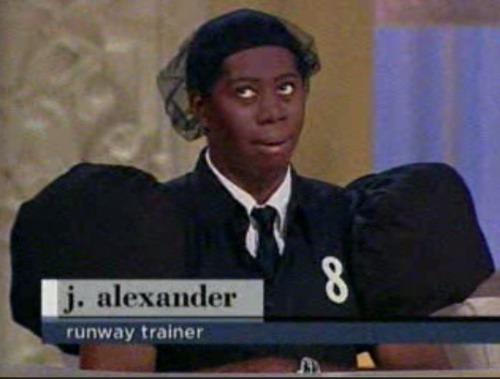 This right here went the accounting track. Girl I am not joking, this. For all we talk about professional conduct and fitting into the mold and not rocking the boat, this was attracted to accounting.

Since 1991, he has been casting and coaching runway models, including Naomi Campbell and Kimora Lee Simmons.

After modeling in Tokyo for three years, he settled in Paris.

Was a runway model for Jean-Paul Gaultier in New York City.

Went to school to be an accountant.

Met Monique Pillard then-president of Elite Model Management when he was doing drag. She sent him to Tokyo to model.

Born Alexander Jenkins in South Bronx, J. Alexander initially dreamed of becoming an accountant. However, after realizing that the job was too confining and after meeting the then-president of Elite Model Management Monique Pillard, he decided that he belonged to the fashion industry.

So you see, kids, there is always a way out. It's just up to you to find it. Or some other inspirational bullshit. Although it sounds like Miss J didn't even get to the point many of you are at as we speak, which is probably a good thing.

What do I love more than an ice cold Diet Coke and a full TiVo queue of bad reality TV? When the reality contestants are accounting scrubs, obviously. I’ve ranked the following accounting reality stars based on courage, entertainment value, and actual talent.   7) The Award for Best Dating Show Contestant: Mara, Legal Accountant […]

For five years, Mitan Sachdev worked in risk assurance for PwC across the pond, conducting control assessments and other such excitement. Like most of you, he dreamed of a better life, so one day he just up and quit. What was his plan for LAP (Life After PwC)? Industry? Government? Nope. Falafel. Bloomberg has the […]