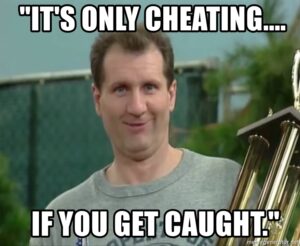 At the end of the Married With Children episode, “Go For the Old,” Al Bundy says: “It’s only cheating if you get caught.” Well, KPMG got caught. The firm was busted for cheating on internal training exams. Again. Just like in the US. This time the cheating was running rampant in Australia.

The PCAOB fined KPMG Australia $450,000 on Sept. 14 for training-related misconduct (i.e., violating PCAOB rules and quality control standards) from 2016 until early 2020, which involved more than 1,100 KPMG partners and staff, including more than 250 of its auditors, taking part in an answer-sharing scheme—either by providing or receiving answers—on mandatory training courses covering topics that included independence, auditing, and accounting.

Does this sound familiar? It should.

The SEC and KPMG US reached a $50 million settlement in June 2019 not only for KPMG partners using confidential information that was being fed to them by a PCAOB insider to improve the firm’s performance on public company audit inspections but also for KPMG audit professionals—at all levels of seniority—cheating on internal online training exams by illegally sharing answers with colleagues and manipulating test results.

At the time the SEC said:

This misconduct took a variety of forms. KPMG audit professionals shared exam answers with one another. A number of audit partners gave exam answers to other partners, and a number also sent answers to and solicited answers from their subordinates. In addition, for a period of time up to November 2015, certain audit professionals made unauthorized changes to KPMG’s server instructions that allowed them to manually select the scores necessary to pass the tests, which they often lowered to the point of passing exams with less than 25 percent of the questions answered correctly. The exams related to a variety of subjects that were relevant to the test-takers’ audit practices, and included additional training required by a 2017 Commission Order after the Commission found that KPMG engaged in improper professional conduct and had caused a client’s reporting violations.

The fallout was three former KPMG audit partners—Timothy Daly, Michael Bellach, and John Donovan—agreeing to a settlement with the SEC in May 2020, which included being suspended from appearing or practicing before the SEC as an accountant for three years, two years, and one year, respectively.

The SEC said that in October 2018, at Daly’s request, Bellach texted Daly images of the questions and answers to a training exam. Once KPMG caught wind of possible cheating at the firm and opened an internal investigation, Daly deleted the texts and lied about having received any answers to the training exams. Daly also “encouraged” Bellach to delete the texts on his end, which he did.

Between April and September 2018, Donovan shared training exam answers with his team three times. He didn’t own up to it, of course, and told firm investigators he had not sent, received, or shared answers. It turns out he did all three.

At the Australian House of Klynveld, audit professionals primarily shared answers using email, by attaching documents containing answers to training test questions, according to the PCAOB. In addition, “answers were also shared via text messages or instant message services, by providing the answers in hard-copy documents, by saving the answers to test questions on a shared server, or orally when taking tests in the presence of others.”

Instances of improper answer sharing occurred in connection with tests that were a part of the Firm’s mandatory training, including the Independence Training, Audit Foundations, Spotlight, and U.S. GAAP and GAAS courses.

Improper sharing of training test answers occurred at all levels of the Firm. After Firm leadership learned of the practice and conducted an internal investigation, the Firm sanctioned 1,131 individuals, or approximately 12% of Firm personnel, for their involvement in answer sharing. The Firm’s investigation revealed that the misconduct was widespread within the Firm’s audit practice, including among those who performed work on audits governed by PCAOB standards. With respect to audit training tests, at least 277 personnel engaged in answer sharing.

The Australian Financial Review reported today that two KPMG partners were forced to retire over the cheating, while another 16 partners received formal warnings and had their income docked by tens of thousands of dollars. Also, another 30 KPMG staff members received warnings and had their pay docked, while the additional 1,131 staff received “verbal or written cautions” for either sharing or receiving exam answers.

KPMG Australia CEO Andrew Yates had to do some damage control, calling the cheating “totally unacceptable” and a clear breach of the firm’s code of conduct, according to AFR:

“I was incredibly disappointed. It reflects poorly on all of us in the firm. But as I’ve said before, I think we have great integrity and great intent. We’ve self-reported and been under program of remediation,” he said.

Mr Yates, who was head of KPMG’s audit, assurance and risk management business at the time, said the firm had just completed a culture review and taken other remedial action over the cheating.

He said the sanctions had been based on the level of individuals’ involvement in the sharing of answers and their level of co-operation during the firm’s investigation.

“There was a range of behaviour [involved], from people who received something and did nothing with it [through to] the people who created an email with the answers on it,” he said.

As part of the remediation program, partners, directors and senior managers in the firm’s audit division were forced to retake two years’ worth of exams.

The firm has also created new integrity training which highlights to partners and staff “that sharing answers in relation to testing is not acceptable”, according to a statement from the firm.

The PCAOB admitted that KPMG Australia would have been given a much larger fine had the firm not self-reported the cheating to the PCAOB within 15 days of learning about it, not disciplined those involved, and had not taken actions internally to make sure something like this never happens again.

SEC Says $50 Million Fine For KPMG Is ‘Significant’ and ‘Appropriate’ For All That Cheating Going On
Which KPMG Scandal Is Worse: PCAOB ‘Steal the Exam’ or CPE Training Exam Cheating?
Survey Finds That Nearly a Third of KPMG Employees Aren’t Surprised by Latest Cheating Scandal
Three Former KPMG Partners Charged by SEC For Being Dirty, Dirty Cheaters