Because it’s #TriviaTuesday, here are a couple of questions regarding PCAOB inspection reports:

But with the release of the Big 4’s latest inspection results by the U.S. audit cops last week, we can now update both of those answers to “2019’s inspection reports,” as not only did KPMG not have the highest percentage of failed audits reviewed by the PCAOB during its 2018 inspection cycle but its failure rate of 29% was lower than PwC’s 30% deficiency rate.

Of the 58 issuer audits of KPMG’s that were inspected, 17 weren’t up to PCAOB standards—most of which had deficiencies in both financial statement and internal control over financial reporting audits: 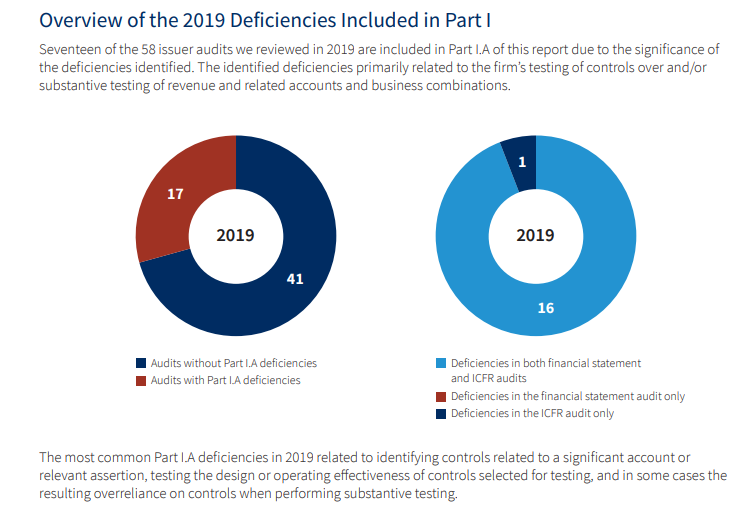 KPMG has been the butt of many jokes on this site for a long time in regards to its mastery of poor audit quality, but the House of Klynveld deserves some credit for cutting its percentage of failed audits by almost half since 2017:

The things that confounded KPMG auditors the most in financial statement audits were: failing to perform substantive procedures to obtain sufficient evidence as a result of overreliance on controls (due to deficiencies in testing controls), failing to perform sufficient testing related to an account or significant portion of an account or to address an identified risk, and failing to sufficiently evaluate significant assumptions or data that the issuer used in developing an estimate.

Problems were most prevalent in controls involving revenue and related accounts and business combinations.

Here’s KPMG’s 2019 inspection report in full, if you’re into that sorta thing:

For Now, PwC’s Audit Quality Stinks
The PCAOB Needs to Just Beat the Sh*t Out of KPMG Already