The Tax Policy Center released a new paper today that should be sufficient for scaring the living daylights out of anyone that doesn't like the idea of taxes going up.

Here's a table that's more helpful for those you visual types: 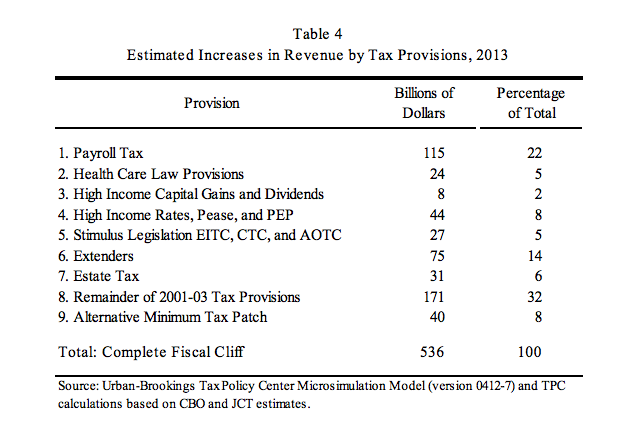 To clarify just a bit – per the paper, the ordering used "is based on [the authors'] estimate of their likelihood of occurring." In other words, the payroll tax cut will probably be let go, while tax cuts for the non-Mitt Romneys are likely to stick around.
But if you'd like a more personal picture, here's what the increase in taxes will look like, in dollars, by income percentile: 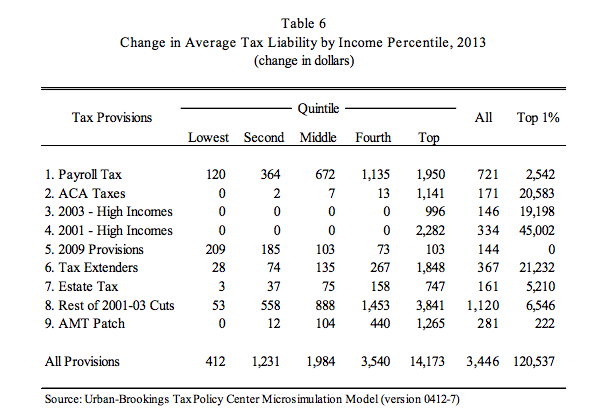 So the worst-case scenario is that most of you could see your tax liability go up $2k-$3k. While that's unlikely to happen, the expiration of the payroll tax cut could prove to be a bit of problem:

Its expiration means less income in families’ pocketbooks — the tax increase would be about $95 billion in 2013 alone — at a time when the economy is little better than it was when the White House reached a deal on the tax break last year. Independent analysts say that the expiration of the tax cut could shave as much as a percentage point off economic output in 2013, and cost the economy as many as one million jobs.

And the worst Congress ever is in charge of preventing it. Where's the panic button?
Toppling Off the Fiscal Cliff: Whose Taxes Rise and How Much? [TPC]
If Congress Goes Over the Fiscal Cliff Your Taxes Will Likely Go Up [TaxVox]
Payroll Tax Cut Is Unlikely to Survive Into Next Year [NYT]

Bad News For Big 4: Educated Men Have Decided to Not Work So Hard