[Updated on May 20 with additional information.]

Nearly a month after RSM US told a slew of underperformers that their services were no longer wanted, we got word on Monday afternoon that furloughs and job cuts have started to hit the firm’s recruiting staff.

A source told us:

As of right now, it is most of the Talent Acquisition team that has been laid off or furloughed. They have kept only a skeleton staff for the time being.

I’m assuming this is because they are doing next-to-no recruiting this first quarter.

Can’t say for sure how many people are affected by these latest human sacrifices for the good of RSM, but our source told us that furloughs will be unpaid with benefits and will last for about two to three months.

[UPDATE] It seems like there were more layoffs among the recruiting team than we had first realized. And it looks like job cuts hit some practice areas for the second time on Tuesday.

A source with knowledge of the latest austerity measures at RSM told us this morning:

250 let go firm wide – both external (audit, tax, consulting) and internal client service (HR, Recruiting, L&D, etc). That includes 1/3 of the recruiting team but not the additional 1/3 that were furloughed.

I was shocked at some of the names I heard – really talented. Some were absolutely cost related – tenured and I’m sure highly compensated individuals. The rest have been described as a knee jerk reaction to Covid and the potential fallout of clients.

Among the recruiting staff, this person told us that the experienced hire recruiting team was hit the hardest by the job cuts and furloughs:

If I had to guess it’s at least 30% of the experienced hire recruiting team. Campus didn’t seem affected. L&D has also taken a big hit as well as the generalists. A very tenured and well respected HR Generalist leader was even let go. Who they’re cutting isn’t making much sense other than a lot of well compensated folks were among the cuts.

This person went on to say that the furloughs and job cuts caught these people by surprise, adding: “The rug was pulled out from under them.”

Up until Tuesday morning we had not heard of there being anyone let go or furloughed outside of the talent acquisition team. But someone started a thread on Fishbowl Tuesday afternoon about layoffs at RSM, both external and internal service. One of the posts said: 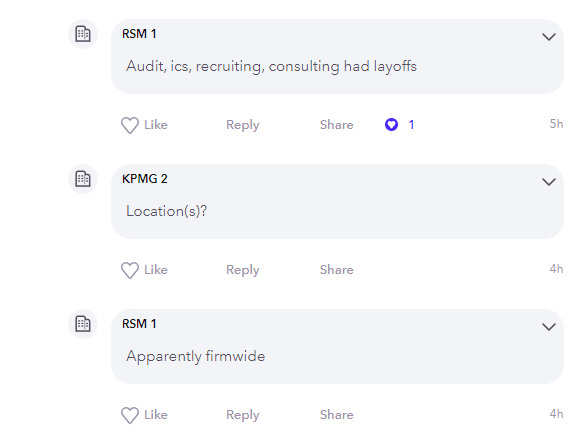 Somebody else in that thread mentioned the possibility of more layoffs on Wednesday, which we have not confirmed yet. We also got this emailed to our tipline on Tuesday afternoon:

There’s also a thread on r/accounting about the second round of job cuts at RSM.

Things aren’t looking too great right now at the House of Adams. If you have any additional details on what’s going down at RSM, let us know by using the contact information below.

Layoff Watch ’20: Here’s What We’ve Been Told About the Job Cuts at RSM US

In a spotlight released by the PCAOB just a few days ago [PDF] the auditors of auditors laid out inspection priorities for 2022, among them increased risk of missing material misstatements (say that 5x fast) due to staff turnover and remote audit work. Oh, and supply chain disruption, the shitty economy, and Rona are also […]