Rebecca Rennison recently entered the Big 4 transfer portal as a director at PwC UK and exited as a partner at EY.

EY recently announced Rennison and Richard Pulford as its most recent senior hires in the firm’s Manchester corporate finance team, according to Insider Media:

Rennison previously led the PwC Yorkshire corporate finance team and prior to that was a managing director in investment banking at Raymond James in Canada, where she worked for 15 years.

Before joining EY, Rennison spent six months on gardening leave, which whenever I see someone from the UK use that phrase, I picture in my mind the person literally gardening every day for three months or six months or however long their leave is because I am a dumb American. But when her presumed non-compete agreement ended, she joined EY at the beginning of September. 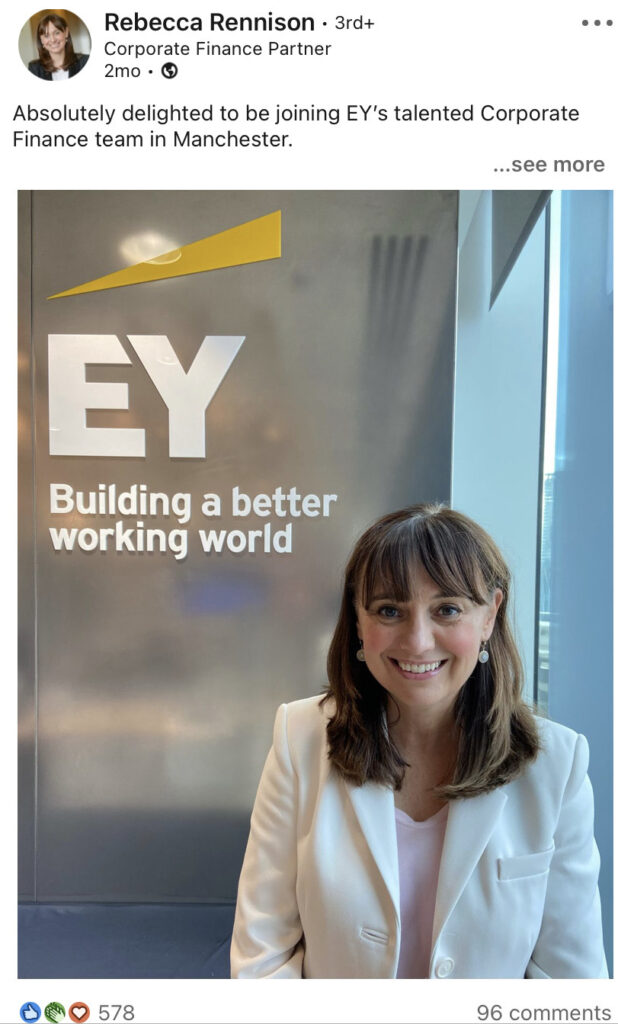 Rennison started her professional career in May 1995 as an associate and then senior associate at PwC in Vancouver before joining Raymond James in April 2000, according to her LinkedIn profile. She rejoined PwC in Manchester in March 2015 as a corporate finance director.

Former Dealmaker of the Year Among EY Hires [Insider Media]

Today’s nugget of knowledge comes courtesy this Reddit post and the OP’s ethics textbook: Debit Does Dallas heh. The textbook author who came up with that deserves a raise. In case you didn’t know, Rule 501 of the AICPA Code of Conduct is a bit controversial due to its completely open nature. The code itself […]

How much concern do we feel for Kevin Ellis? He should sit pretty—senior partner of the UK firm of PwC, which in 2021 clocked up record global revenue of $45 billion. The average profit of his UK partners was a league-leading £868,000, and Ellis himself in 2020 took home a handsome £4.4 million. Instead, this week’s press attention […]