Today in potential career limiting moves, we have a prospective PwC intern being accused of creating a bunch of “sock puppet” Twitter accounts to hurl bigoted tweets at high school football recruits.

Today in potential career limiting moves, we have a prospective PwC intern being accused of creating a bunch of “sock puppet” Twitter accounts to hurl bigoted tweets at high school football recruits.

Going Concern received a couple tips with links to University of Texas football forums that have long threads about Daniel Figurelli, a student in Texas A&M's master’s of accounting program who is slated to be an intern this summer in PwC's Houston office.

The beginning of this thread basically sums it up:

The site ShaggyTexas.com is where several images of the tweets (now deleted) and Figurelli’s retweets (also now deleted) appear. In one case, the handle of one of the alleged sock accounts, @CFB_RT, is shown as "TAMU Football" in a Google search: 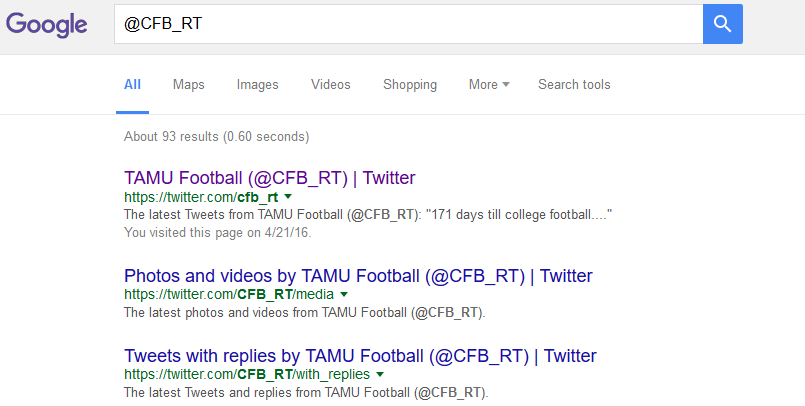 And is then was changed to "Lets commit to UT!" and that posted offensive tweets, which Daniel retweeted: 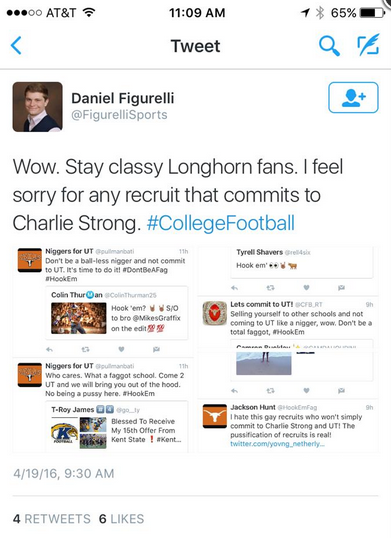 So, yeah, it's all pretty suspicious and there's plenty more where that came from. All those tweets have been deleted and Daniel has made his personal account private.

In any case, the thread was getting around as these things are wont to do, and apparently, Figurelli contacted the Shaggy Texas owner, threatened to sue and we all know that old saying: Don’t quarrel with someone who has a popular Texas football website on the internet.

The site HornSports tracked him down for his side of the story and got him to admit that he created the accounts in question. He says that he sold them to someone else, and that's when the ugly tweets started. When someone accused him of being behind it all, the accounts were taken down shortly thereafter. Daniel claims to not have any part in it, but he doesn’t say who he sold the accounts to and doesn’t provide any proof that he sold them. The subsequent comments indicate that most don't believe his explanation.

Football is important in Texas, I get it. But this defies all logic. Trolling high school football players and a rival college? Maybe I’m just getting old, but do people not think about the consequences of behavior like this? As in, how it might affect your job prospects? A source at PwC told me that the firm is looking into the matter.

Even if he could prove to be 100% innocent of tweeting the slurs, the mere following of racist Twitter accounts and calling attention to racist tweets for the sake of trolling another school would be enough for most HR folks to take a pass. Again, PwC has not said whether Figurelli's internship is in jeopardy.

I think the lesson is obvious but it bears repeating: acting like a jackass on the internet is all fun and games until the internet turns on you. And a convoluted, suspicious explanation will actually make things worse. Then you have to explain it to every potential employer you meet.

And that's really what matters. Regardless of your qualifications or accomplishments, when you have to answer an interviewer's question that begins with, "We found some interesting things when we Googled your name…" that's going to be an awkward conversation.

Big 4 firms spit out all kinds of research — very little of which rates a mention beyond maybe somewhere in a linkwrap if that — but this research from KPMG we’re about to share with you (which we did bury in a linkwrap some weeks back) deserves a callout of its own. Not because […]