12 years ago my former colleague Caleb Newquist published a post titled “Do Accounting Firms Care if You’re On Drugs?” A good chunk of that post describes Wall Streeters getting blitzed at real estate investment trust companies because back in those days accounting news was extra slow and we wrote about a lot more finance-adjacent stuff until enough commenters bullied us into focusing solely on Big 4 firms and maybe Grant Thornton every now and then when GT does something boneheaded (so, technically not every now and then). I’ll skip the Wall Street part and fast-forward straight to the accounting part he used to make the post somewhat relevant to our audience, my observations in brackets:

[Y]ou rarely hear about the drug use that goes on at accounting firms. Which makes us wonder if it’s because it’s not happening period. To our knowledge – accounting firms don’t give employees drug tests as a condition of employment and simply defer to clients who require them (a certain Swiss Bank with proximity to shroom burgers comes to mind). [note: I have absolutely no idea what he’s referring to here. Can anyone clue me in? I tried Googling and all I got are a bunch of Swiss mushroom burger recipes and a helpful article about what to do if someone you love is on drugs]

It’s no surprise. You Big 4 types (and anyone at a CPA firm for that matter) go through your personal hell on a seasonal (or maybe a constant) basis so there’s probably a direct correlation with your usage and the time of year. For example – that tax manager that manages to work night after night after night with amazing focus as the final 2010 deadlines draw near? You think they just plug themselves in when they finally go home to recharge for the next day? [Reminder this was written 12 years ago. Some things never change]

Plus, as you’re acutely aware, it’s not just the illegal drugs that are popular, “[T]he rage these days is a Pez dispenser with the head of a red devil. Inside? Pills of Oxycodone or Percocet.” And don’t forget the people that have been popping Adderall since college so they can study for 12 straight hours. That has simply carried over into the 14-15 hour days for X amount of consecutive days during busy season. [Pez dispenser quote refers to the Wall Street problem referenced above of finance workers who “feel entitled to illicit drugs, given their paychecks and stress of their jobs” per this 2010 NY Mag post]

And don’t get us started on people who get addicted to fast food (a drug in its own right) in order to save time and eat at their desks. The chemicals in the food from [pick your chain] are just as addictive as any drug off the street or from the pharmacy and cause just as much damage to our bodies. [Caleb I love you but you’re being really dramatic. Just because you shop at Whole Foods doesn’t mean someone who gets takeout five times a week because they’re too busy at work is literally the same as the flakka guy gyrating wildly down a Florida street, calm down]

But as you’ve no doubt heard over and over in the peanut gallery, getting your work done is ultimately what matters. Come hell or high water. Come dependancy [sic. I guess red squiggly spellcheck lines didn’t exist in 2010], insane weight loss or insane weight gain. And lots of people do whatever it takes to cope with that reality.

So? What’s the scoop these days inside your firm? Are drug tests just a section of your offer letter that you agree to, only to be never reminded of it again? Anyone every [sic again. Damn this guy with the typos, I’m leaving it in the historical record] been tested? We understand that no one is operating heavy machinery out there but bad things can still happen, quite possibly in the name of client service.

Well that was…interesting. Surely the original article was packed with tons of comments about experiences with drugs and drug testing at Big 4 firms and tales of people tripping balls in audit rooms as believe it or not our comment section used to be poppin back in the day, unfortunately it appears these comments are lost to time as all our comments pre-2018 (?) are. I think it’s something to do with changing our CMS a couple times over the years. Anyway.

The reason I am updating this ancient post is because it seems “do Big 4 firms drug test?” is a hugely popular question based on my seeing it every other day on my regular rounds through the internet’s accounting halls. I wondered if anything had changed from when this was written in 2010 to today other than the distinct lack of typos on this website nowadays. After all, several states other than California have legalized recreational marijuana since then and apparently you can even buy shrooms online in Canada which holy shit, what?!

Oh BTW I think I figured out that shroom burger thing. Caleb references it in a drug testing part deux post he made in 2011 though his rampant typos make it difficult to understand:

Back in my House of Klynveld days in New York I worked on-site at a large investment bank that perilously close an amazing ‘shroom burger. This particular client required a drug test for all on-site contractors. KPMG did not require a drug test and I do not recall if employees were subjected to random testing.

What? Was he high when he wrote that? See what happens when you don’t have a client lording over you keeping you sober?

SO. About the original question. Sorry, I got sidetracked with that shroom burger. Actually I really need to understand what this shroom burger thing is. Hang on. 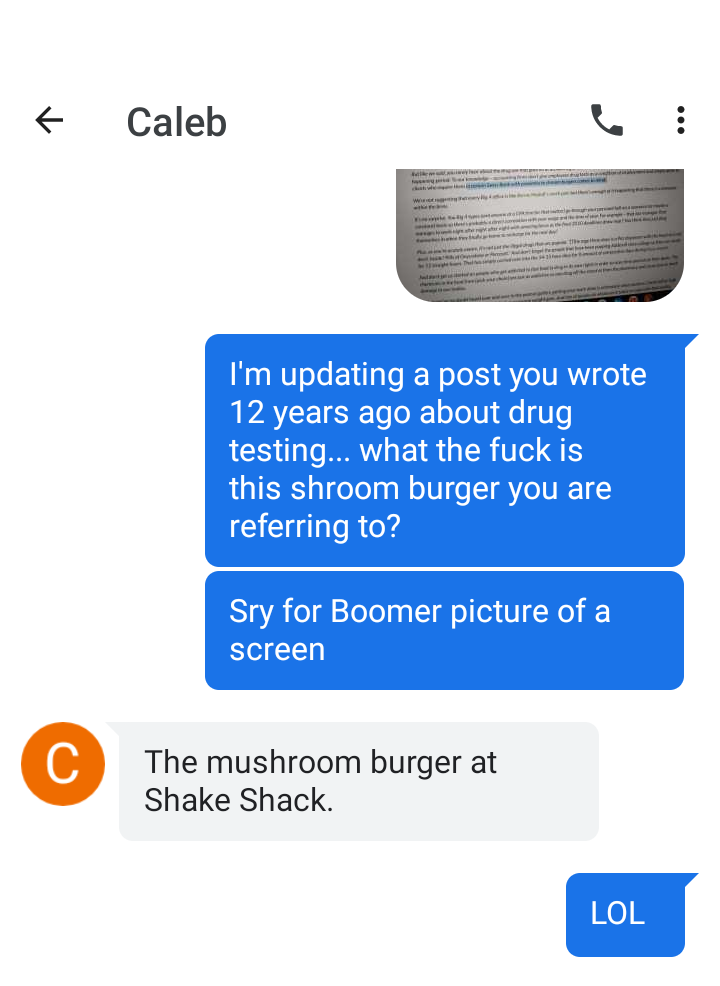 OK I figured it out. This shroom burger, which I am assured was literally mushrooms on a burger and not the psychedelic Krabby Patty I imagined in my mind, could be purchased from an establishment right by the client’s office making it a tempting draw for a young, not-on-drugs KPMGer doing client stuff. Whew, glad we got to the bottom of that mystery and can move on.

Many things may have changed in 12 years but Big 4 firms’ general take on drug testing has not. Based on our thorough research (by “thorough research” I of course mean “I asked a couple people and then I checked 150 Reddit threads and 4 pages of Google results”) Big 4 firms do not drug test. That said, if you do government work, have bank clients (like Caleb did), or end up on an engagement for some Latter Day Saints conglomerate then expect to get drug tested at the client’s insistence. If you think you might piss dirty, TELL THE FIRM. I mean, maybe not if you’ve been on some wild coke bender for a month straight. But let’s say you hit a joint last week — OK, this morning — and find out the client they just put you on drug tests, just tell your handler/manager so they can stick someone else who isn’t going to fail a drug test on it. NBD. I mean, yeah, everyone is critically understaffed and there are no spare people to stick on engagements in place of the druggies on the payroll but whatever, hard times call for hard drugs. Wait, what?

For informational purposes only and definitely not because I know a bunch of you are on drugs I am going to list how long it takes certain drugs to leave your body.

Via Drugs.ie (trustworthy source no doubt):

Remember hair tests can detect use going much further back than what’s listed above. I’m informed that client-mandated hair tests ARE possible so shave your head accordingly. Though I guess if you’ve been ingesting massive amounts of drugs for the last three months to the point you’re worried about a hair test you’re probably already on a PIP and about to be counseled out anyway so disregard this whole article.

One last thing, those of you who take CBD and/or that newfangled Delta 8 stuff should be aware that it can and will make you test dirty. CBD not always, Delta 8 definitely. So if you’ve been puffing on sketch gas station carts you will probably not pass a drug test. Disclose and the client will be someone else’s problem. What are they gonna do, fire you? I mean…I guess yeah, maybe. Oh well, you didn’t like that job anyway.

Do Big 4 firms drug test? NO, probably not. But clients might require one, in which case YES. As always there are exceptions to every rule, maybe there’s some office somewhere in Utah with a straight edge partner who makes Nancy Reagan look like a druggie and tests everyone who comes into the door but for the most part incoming hires who’ve spent the months since graduation hitting the bong have very little to worry about other than that pesky CHS. Additionally, the above information applies only to Big 4 firms, we hear regional firms are a bit more eager to collect piss.

So that’s it, hope your question was answered. I know mine was. See you in another 12 years when marijuana is federally legal to see if anything has changed. Probably not. These are accounting firms we’re talking about after all, change is not in their vocabulary.