It’s been a while since we’ve posted an Accounting Fraud Watch, but there’s news to share, starting with Under Armour’s possible shady accounting.

Five things to know about the federal investigation into Under Armour [Baltimore Sun]
The Wall Street Journal broke the story on Sunday about Baltimore-based Under Armour’s accounting practices being investigated by the SEC and the Justice Department. Because I’ll be in Baltimore this weekend, let’s see what the Baltimore Sun is saying about this, specifically regarding whether the company used some trickery to make its financials appear healthier.

“Some industries, like fashion, are highly seasonable, with sales varying widely from quarter to quarter,” Spence said. “There appear to be two questions here. The first is, was this a ‘smoothing’ of revenue to make quarterly revenue recognition more consistent?”

Another question would be whether the company recognized revenue in advance and expected to make it up in the next quarter, he said.

“Both practices are highly questionable accounting, if not outright fraud,” said Spence, who added he has no specific information about practices at Under Armour. 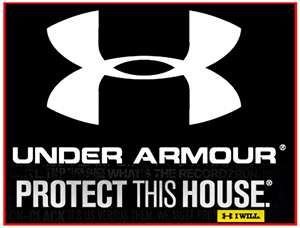 According to reports, the SEC has believed that Under Armour’s accounting has been fishy since 2017.

Under Armour CFO David Bergman said during a conference call with analysts on Nov. 4 that the company’s “accounting practices and disclosures were appropriate.” He’s obviously following Under Armour’s longtime edict of “We must protect this house!”

Which firm is Under Armour’s auditor? PwC. Who can forget that time when PwC lost a flash drive that contained Under Armour employee payroll information.

Our friend Francine McKenna over at MarketWatch has been dropping some interesting tweets regarding PwC and Under Armour in the last day or so:

The WSJ story doesn't mention Under Armour's auditor, PwC nor the partner responsible for the audit, even thought it is now easily looked up in a public database. PwC gave it a clean audit opinion in its last annual report even though its accounting has been a mess for a while.

$UA had a gross vs net restatement last year, similar to Kraft Heinz, also audited by PwC. (Uber, Lyft also audited by PwC use net vs gross.) Subscription revenue was previously recorded net of any related commission, but will now be recorded gross.https://t.co/ASzJCRB3Tp

Here's some background on the net vs gross debate with regard to Uber I wrote in 2017. https://t.co/k3rX6VyaGr

Manipulating estimates is an easy way to shift revenues between periods.

Kindberg, who denies any wrongdoing, and two others were found guilty of charges of accounting fraud and breach of trust, between 2013 and 2017. Kindberg, who was sentenced to three years in jail, said he would appeal.

Kindberg and the two other men were ordered to pay around 13 million Swedish crowns ($1.35 million) in compensation to the companies they defrauded.

From February 2014 through February 2016, Comscore, at Matta’s direction, entered into non-monetary transactions for the purpose of improperly increasing its reported revenue. Through these transactions, Comscore and a counterparty would negotiate and agree to exchange sets of data without any cash consideration. Comscore recognized revenue on these transactions based on the fair value of the data it delivered, which had been improperly increased in order to inflate revenue.

The SEC also said that Comscore and Matta made false and misleading public disclosures regarding the company’s customer base and flagship product, and that Matta lied to Comscore’s internal accountants and external audit firm, which was EY. This scheme enabled Comscore to artificially exceed its analysts’ consensus revenue target in seven consecutive quarters and create the illusion of smooth and steady growth in Comscore’s business.

To settle the charges, without admitting or denying the orders’ findings, Comscore and Matta agreed to cease and desist from future violations of the anti-fraud provisions of the federal securities laws and to pay penalties of $5 million and $700,000, respectively.

Matta also agreed to reimburse Comscore $2.1 million representing profits from the sale of Comscore stock and incentive-based compensation pursuant to Section 304(a) of the Sarbanes-Oxley Act and to the entry of an order barring him from serving as an officer or director of a public company for 10 years.

The SEC had alleged that Montgomery prompted Osiris to book fake revenue and give false information to auditors. Montgomery agreed to a judgment that enjoins him from future violations of securities law, the SEC said in a statement.

The crisis at Goals started in March, when the company reported a £12 million black hole in its accounts. Several years’ worth of accounts needed to be restated. In September its shares were delisted from AIM, and earlier this month it admitted that the shortfall in its accounts could be much larger than first reported.

In a statement to the stock exchange announcing its sale to rival Soccerworld, Goals confirmed that its profits had been overstated by as much as £40 million since 2009. An audit and other investigations revealed “serious issues were identified concerning the accounting treatment of VAT” and “other areas of inappropriate accounting.”

This press release from the SEC is wayyyy too boring to be rewritten in an interesting way on a sunny Friday afternoon so have some copy paste instead: The Securities and Exchange Commission today charged audit firm CohnReznick LLP with improper professional conduct on engagements for two clients in 2017. The two clients, Sequential Brands […]

Hanlon’s razor states “never attribute to malice that which is adequately explained by stupidity.” Meaning most of the time when someone does something bad, it’s not because they’re a bad person, rather too stupid to know better. Or something. Socially anxious people with victim complexes — who no doubt make up a large portion of […]