The owner of McAuliffe CPA Enterprises in Mineola, NY, took a field trip down to Washington, DC, and decided it would be a good idea to join a bunch of other domestic terrorist doofuses in storming the U.S. Capitol on Jan. 6 because they actually thought they could prevent Congress from confirming Joe Biden as the 46th president.

And just like many of the other doofuses who posted photos and videos on social media of themselves inside or around the Capitol, so too did Justin McAuliffe. Maybe he thought he wouldn’t get caught? I dunno. Anyway, from his Facebook page: 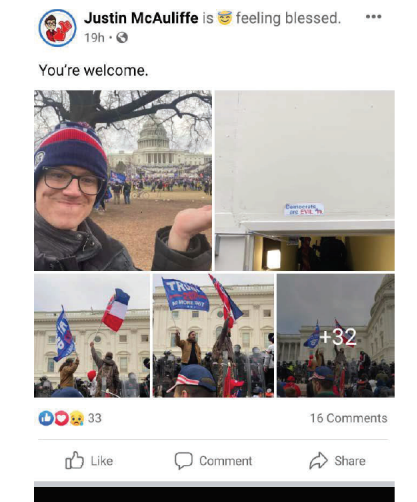 It took a few weeks but McAuliffe did get caught, as the New York Post reported on Jan. 28:

Justin McAuliffe, 39, was arrested at his home in Bellmore, Long Island, Thursday morning for joining the Jan. 6 insurrection at the US Capitol that left five dead.

In the days after the violent assault, an ex-pal allegedly contacted the FBI by phone to turn him in.

The former friend shared images McAuliffe had posted on his Facebook page, which he deleted after the attack, showing him posing outside the US Capitol.

The FBI tracked down his Telegram account and discovered a picture of him hanging out in an unnamed Congress member’s office during the breach, court papers allege. 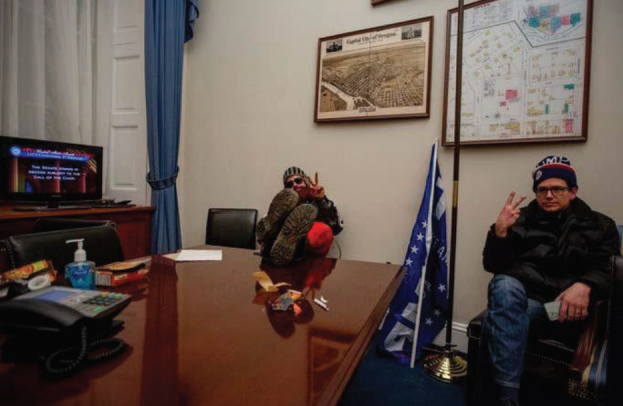 That’s McAuliffe seated on the right holding the smartphone in his left hand.

The feds also got some more incriminating evidence against McAuliffe from someone who contacted the FBI tipline, according to the criminal complaint against the accountant:

For example, on or about January 8, 2021, an individual contacted the FBI and provided his/her first and last name and contact information (“Witness-2”). Witness-2 provided at least two photographs, which he/she represented to be snapshots from McAuliffe’s Facebook. The first photograph appears to be of McAuliffe’s smartphone settings showing that he had access to the Wi-Fi at the U.S. Senate, indicating that he was close to or inside the Senate offices: 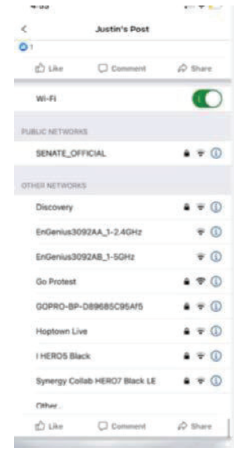 The second photograph provided by Witness-2 shows McAuliffe having a conversation over Facebook with another individual. In one message, McAuliffe states: “yeah I was in one of the offices. Some people were smoking a joint in the room, lol. Cops came in and weee like. Okay guys really? They didn’t even ask us to leave right away. They let us sit down and hang out and relax.” 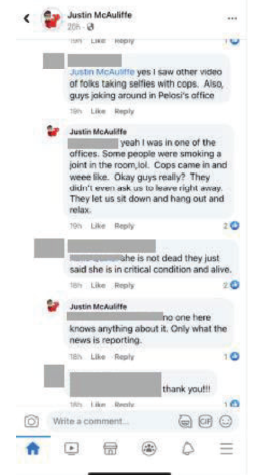 McAuliffe was charged with one count of knowingly entering and remaining on restricted grounds without lawful authority and one count of engaging in disorderly conduct within proximity to a restricted building to impede official functions.

He was expected to make his initial court appearance on Jan. 28.

So How Much Work Did You Actually Get Done Today?