Though some progress has been made in recent years, women continue to be suspiciously absent at the highest levels of public accounting. This fact has been amplified by new research published in Journal of Accounting and Public Policy. “Gender equity in public accounting: Evidence from single audit partner and director engagement leaders” examines vertical segregation in director positions which are an alternative terminal destination to the partnership. By examining public audits from the seven largest accounting firms, researchers found that directors signing audit reports for nonprofit entities were twice as likely to be women than men, despite the fact that there were fewer female directors.

According to the 2021 AICPA Trends report, women make up 51% of combined bachelor’s and master’s accounting completions and an impressive 54% of master’s completions alone. There is absolutely no doubt women are just as attracted to the accounting profession as men, perhaps moreso. 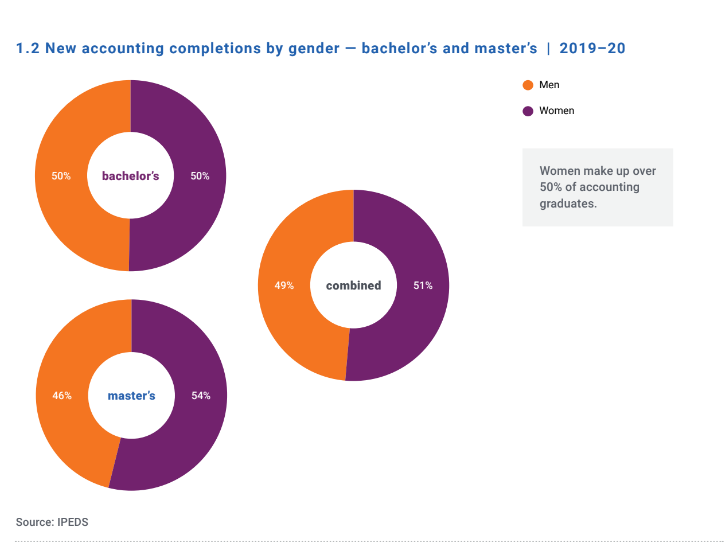 Concerning new graduate new hires hired into accounting/finance functions at U.S. CPA firms, women comprised 49% of these hires in 2020. However, the herd starts to thin the further up the ladder.

“Women and men are hired into these public accounting firms at a very equal ratio, but at the partner level, it’s disproportionate,” said Kathleen Harris, an accounting assistant professor with Washington State University’s Carson College of Business and corresponding author on the study. “If we want equity in accounting, then both men and women need to be at the table making decisions.”

The suggestion here is that director positions are sort of a consolation prize while all the power (and profit) lies in becoming partner. Reads the WSU press release:

[Partners] buy into the firm, hold voting power and help strategically plan how the firm goes forward. It is a high risk, high reward position, Harris said. Directors, while highly skilled and compensated, are salaried employees without voting power.

That isn’t to say the director level is jam-packed with women. The press release goes on:

Both leadership levels lack gender equity with women making up 32% of directors but just 18% of partners, according to self-reports by large firms in 2016. This “vertical segregation,” where men are clustered at higher levels than women, was also noted in earlier research in 2011 with the director-level dubbed a “pink-collar ghetto.”

The current study shows that division is persisting. Harris and her co-authors, Elizabeth Almer of Portland State University as well as Julia Higgs and Joe Rakestraw of Florida Atlantic University, analyzed more than 1500 audit engagements from 2017 Federal Audit Clearinghouse data for the seven largest public accounting firms. They found that among audit signers, directors were more often women, and partners more often men.

Study authors found that directors signing single audit reports are more likely to be female after controlling for multiple client and signer characteristics. This result demonstrates a clear pattern of vertical segregation among engagement leaders, they said.

Interestingly, the researchers found a bit of unexpected info in regards to fees. Of the engagements analyzed, audit clients paid more for female partners who signed audits versus female directors or even male partners and directors. This study could not determine exactly why that was the case, but Harris said it is possible that some audit clients with goals for increasing diversity may be specifically asking for women partners to lead their audits, driving up demand for a limited supply. They found a fee premium for female partners but a fee discount for female directors and no fee difference between male partners and directors. We’ll keep an eye out for further research on that point.