There probably aren’t too many accountants who can say they’ve worked as head of tax at both Grant Thornton and KPMG in Scotland, but if such a club exists, Vishal Chopra is its newest member.

Several news outlets in the U.K. have reported on Chopra’s recent move from GT to the House of Klynveld, including Insider.co.uk which published the following info taken from a KPMG release:

Chopra, a corporate tax specialist, will lead a team of 90 tax professionals operating across the firm’s offices in Aberdeen, Edinburgh and Glasgow. …

With a background of working with private businesses, … Chopra succeeds Alan Turner, who has led the Scottish tax practice for the last three years, and has been promoted to lead the firm’s corporate tax and legal services practice across the UK.

Turner, an international tax specialist who has been with the firm for 15 years, will lead a team of 450 tax professionals and lawyers, providing services to the firm’s largest multinational and listed clients.

As part of his new role, he will continue to work with large corporate clients in Scotland.

Chopra took to LinkedIn last week to announce his new digs … you know, once the new U.K. coronavirus lockdown ends: 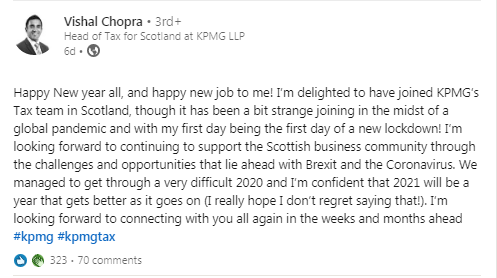 Chopra spent nearly nine years at Grant Thornton, as a tax director and then as a tax partner who led the firm’s tax practice in Scotland, according to his LinkedIn profile.

He also has previous Big 4 experience: Chopra started his career at PwC in 2002 where he worked for more than nine years, including as a tax manager and tax senior manager, before going to GT in 2012.

KPMG Poaches Someone From Grant Thornton and Issues a Press Release, Parts I and II

Deloitte to pay Malaysia $80 million to settle claims linked to 1MDB [Reuters] Audit firm Deloitte PLT will pay Malaysia’s government $80 million to resolve all claims related to its auditing of accounts of scandal-linked state fund 1MDB and its unit SRC International from 2011 to 2014, the finance ministry said on Wednesday. ‘There Is […]

Endlessly scrolling my YouTube recommendations the other night in a desperate attempt to scrape up the tiniest shred of dopamine, I came across the video I’m about to share with you all. It’s about the “Hall of Tortured Souls,” an easter egg buried in Microsoft Office 1995. This website has been around for 12 years, […]