Latest
Deloitte Survey: C-suite Execs are Burned Out, Delusional, and Lack Empathy (And Also Want to Quit) EY New Hires Are Gonna Have a Tough Time Getting Straight Answers From Reddit For the Time Being Which Firm Had the Most IPO Audit Clients In Q1 2022? KPMG Will Pay the Department of Justice $307k For Discriminatory Job Postings More Scary Anti-WFH Headlines: Is Remote Work Bad for Your Mental Health?

I had it all planned out. Knowing that KPMG would likely announce its 2020 global revenue this week, I was going to give KPMG kudos and kongratulations and golf claps for finally hitting the $30 billion mark, which would be an all-time high for the firm. And then troll KPMG a little for being the last of the Big 4 firms to reach $30 billion.

But I wasn’t expecting the following news from KPMG this morning:

Through a year of economic and social turbulence, KPMG International today announced KPMG firms’ annual aggregated revenues of $29.22 billion for the fiscal year ending 30 September 2020. FY20 growth had a strong start with gross revenue growth slowing in the second half of the year. Overall billable hours and net sales increased throughout the financial year as firms continued to support clients in their response to the COVID-19 crisis.

Dammit, KPMG, thanks for ruining my plans!

I honestly didn’t think we’d see a Big 4 firm with decreased revenue in 2020 because of the coronavirus pandemic; I’m thinking that’s more of a possibility in FY 2021. But if there was one firm that would see a drop-off, it would be KPMG because its fiscal year end is so much later than PwC’s, Deloitte’s, and EY’s. So KPMG only had four or five months of pre-pandemic success, whereas the other three had seven or eight months before the pandemic really impacted their businesses.

According to the release from KPMG, the firm had a pre-pandemic growth rate of 5%, but that growth got completely wiped out and fell to -1% by the end of the financial year.

All three of KPMG’s core service lines brought in less revenue than in 2019: 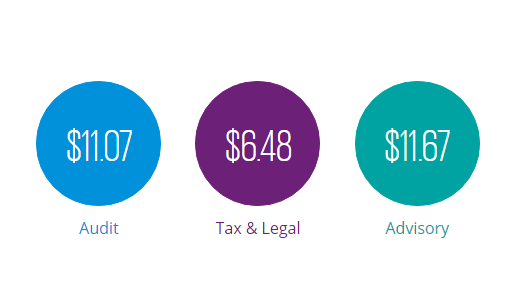 One bright spot was KPMG’s global legal services, which grew 6% in 2020, according to the release.

So thus ends the Big 4 revenue pissing match of 2020. Here’s a recap of everyone’s totals (percent increase or decrease in parenthesis):

The hardworking human beings at Audit Analytics have released their analysis of initial public offering trends and IPO auditor market share for the first quarter of this year, a period in which the number of companies going public was minuscule compared to Q1 of 2021. All told there were 84 IPOs on the New York […]