In the history of this website, we have posted many farewell emails; the dramatic, the sad, the ridiculously long-winded. Of those, there is just no category for what follows. This person obviously isn’t cut out for the job, but if success in auditing were based solely on the craziness of the email you send your team on your way out the door, this email writer would make partner in a matter of weeks.

Note to interns: no matter how angry you are at your own life choices, don’t bring your team’s pets into your farewell. And if you must, don’t do it before your last day.

Normally I’d edit out the obnoxious formatting but in this case, it only adds to the mania of this email.

After careful consideration, I will be ending my employment with PwC effective Monday.

I’ve done two audit internships, one at Deloitte and one at PwC. I hated it then but I thought I’d give it a third try. Third time’s a charm right? GTFOH(If you don’t know what it means Google it!) Basically, my time here as an associate has confirmed everything I already knew ten times over. Auditing is a job for people who truly don’t have any other options and don’t know what else they could be doing. You work day in and day out pulling useless documentation and filling out useless workpapers that won’t really benefit anybody. All of it is BS! After asking dozens upon dozens of auditors what they think of their jobs and getting responses that include “I love my job!” or “I wouldn’t trade it for the world,” I realized just how fake auditors can be.

I strongly believe that auditors hate their lives and try to rationalize every piece of it. “Oh it’s just busy season” or  “If everybody did the jobs they loved to do then there would be nobody doing the jobs that need to be done.” Measley excuses to justify pursuing a useless, meaningless career….

You can see where this is going. Rather, you think you know where it’s going — unlike our fearless writer, who has no idea where she is going except straight out the door — and then BAM, the surprise right hook. Let’s give her credit, while she may not be good at auditing, she’s a pro at burning bridges.

Here are some tips and pointers I thought I’d share for all of you to use through out life, you’ll need it. I also throw some tips in there that you can take back to the next [redacted] Team Meeting or just any meeting where real people’s suggestions can be heard. Maybe a board meeting of some sort with some really important partners, because they’re so important right? (side eye)

I know she just said she was going to give 10 reasons why Baddie Bey will kill Britney Spears but it’s still unbelievable that she actually did it for some strange reason. IMMA LET YOU FINISH BUT…

1. Beyonce can sing and dance live without lip singing and do it well. She doesn’t need autotune or a background track to make her the Queen. All she needs is a mic, some heels, and her fabulous Brazilian and Malaysian wig to swing around. Can’t say the same for Britt. Sorry girl!
2. Beyonce has much more class.
3. Beyonce’s music transcends culture. Britt….uh….well, that stopped a few world tours ago.
4. Beyonce has continued to get better and better over time. Her vocals are stronger than ever. Not to mention, after popping out Baby Blue she was back at it. She didn’t get all washed up and boring like Britt did.
5. Beyonce is on some presidential ish. Didn’t you watch President Obama and First Lady Michelle’s first dance? Or the inauguration performance? Haven’t you kept up with the Let’s Move campaign (Bey and First Lady Michelle’s initiative to solve the epidemic of childhood obesity? ) Well, Bey has been on! Britt has stayed in the shadows. #sorrybutnotsorry #getyourlife
6. Beyonce killed the Superbowl half time show solo dolo. Britt and NSYNC did that back in the 90s…but that was the 90s…and she wasn’t solo dolo…so Bey wins!
7. Beyonce can dance her butt off. She has rythym. Britt used to be able to …but she is stiff now. I’m sorry..
8. Beyonce has stage presence. I don’t think you know what that is but you can Google it. It’s basically something Britt doesn’t have.
9. Beyonce is the QUEEN. She is the best performer alive. Bottom line, no gimmicks!
10. Beyonce wins and now that I’m out of here, I win too!!! #doingtheharlemshakeasitype

What in the actual fuck just happened here? Anyone know? 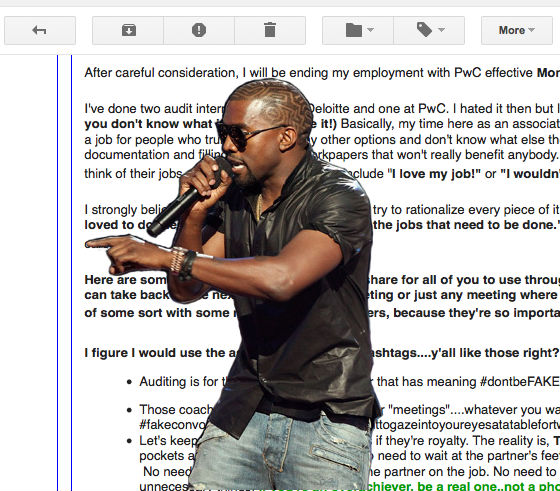 Big 4 FRC to fine Deloitte £440k over 2018 audit [Accountancy Today] The Financial Reporting Council’s Audit Quality team has issued a notice of a proposed sanction on Deloitte, proposing a regulatory penalty of £440k after it was determined that the Big Four firm failed to comply with the auditing framework in its audit of […]

According to the horse’s mouth, EY is buried under millions and millions of resumes and on track to hire nearly a quarter of a million people this fiscal year. Bloomberg: EY is on track to hire around 220,000 people in the twelve months to July 2023, having achieved its highest growth in nearly two decades […]