OK, let’s talk about layoffs and accountants. The COVID-19 pandemic and the resulting dumpster fire that is the U.S. economy has quite a few capital market servants worried about losing their jobs. And some have taken to sites like Fishbowl and Reddit to voice their concerns.

The thing is, nobody knows what’s going to happen. The prevailing wisdom among those in public accounting is that the Big 4 firms and the like are going to forego bonuses and raises, implement hiring freezes, and even force partners to take pay cuts before they start laying people off.

A former PwC managing director, who worked at the firm during the financial crisis, told me yesterday via email:

Being a 55-y/o mg dir at the time (now retired) I’m grateful. Hope they do the same this time.

EY was the first of the Big 4 to cancel performance bonuses this year in an effort to keep EYers employed through the pandemic, and it’s likely the other Big 4 firms will soon follow suit.

We even got a tip this morning that the executive directors and partners at PwC India are taking a 25% pay cut in March and raises will be delayed and are expected to be lower this year because of the pandemic. However, we weren’t told anything about layoffs at the firm.

Despite firms taking measures to avoid layoffs, accountants are still concerned, according to a recent survey of Fishbowl members. From March 13 to March 16, more than 17,000 verified professionals who use the Fishbowl app answered the question: Do you believe the coronavirus will result in layoffs at your company?

Overall, 54% of professionals believe that COVID-19 will result in layoffs at their company. Among the 2,373 accountants who use the platform and took the survey, four in 10 said there will be job losses.

The numbers are even higher among employees of consulting firms, like Deloitte and Accenture, with nearly six in 10 consultants who took the survey predicting layoffs.

Here’s a bar graph of the survey results by industry, courtesy of Fishbowl: 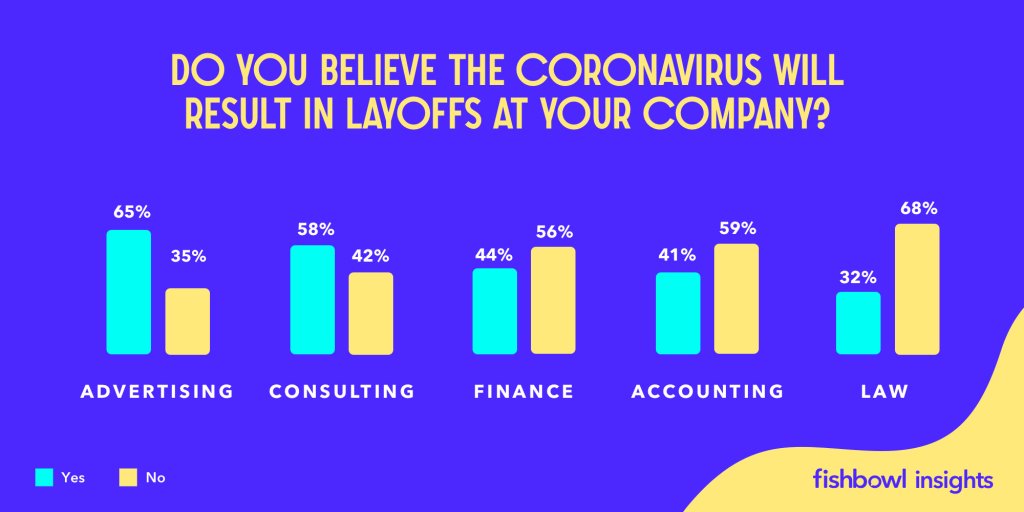 But the last thing Adrienne and I want to write is a “Layoff Watch” article. We really hope everyone survives this crisis and stays healthy—physically, mentally, and financially.

Bonus Watch ’20: EY Employees Aren’t Getting Performance-Based Bonuses, But Their Jobs Are Safe For Now

An article titled “PCAOB Inspections: Public Accounting Firms on Trial” describes the results from an academic study and survey about the effects on auditors who have been subject to PCAOB inspections. One of many good observations from that academic study is repeated below: Respondents collectively perceive that audit quality has improved as a result of […]

After a roller coaster of a week that ended with the fall of Bill Michael at KPMG, it is time to don the forensics hat to determine how it went horribly wrong. The Titanic may have hit an iceberg, but where did Michael trip over his didgeridoo? Michael the F-bomber: Ben Marlow, a business columnist […]